Pistons Woeful Ways Something to be Shameful of

Christina Alexander has her opinion on the struggles the Detroit Pistons have faced this season. 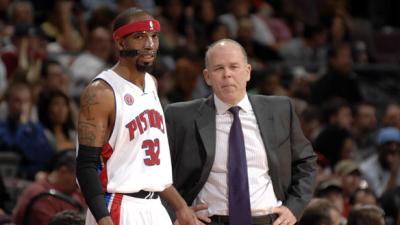 Warning: This article may contain rants not suitable for a Detroit Pistons fan.

The Detroit Pistons are a disgrace.

The franchise is a disgrace to the National Basketball Association, and most notably to the citizens of Detroit.

The citizens don't deserve this; they have worked too hard.  Giving up is not in the makeup of this city. Not even economic hardship and a political black eye can slow them down.

Fans confide in their sports teams. They invest whole heartedly, physically and emotionally. The entertainment value is an added bonus.

When reports emerged that seven Pistons players had a Feb. 2, shoot-around in Philadelphia in an alleged protest against their second-year coach John Kuester, Pandora's Box was opened.

That same night against the 76ers, Kuester was ejected from the game after disagreeing with the refs. What the cameras caught next was the the players on the Detroit bench smirking and laughing.

And those players call themselves professionals. Professionals are people who can work through adversity and overcome the indifferences in their field by communicating.

Then came the argument heard around the world between Kuester and Richard Hamilton reported after the NBA tradeline. Disappointment is knowing Hamilton is a captain and displayed the kind of behavior he did in front of the younger players. For those few minutes Hamilton lost himself in a moment of selfishness.

Repercussions for Hamilton are irreversible; he has already done the damage to his reputation and playing career. He may still have some juice left in the tank, but the stigma that will follow him is something he can't wash his hands of.

The Palace of Auburn Hills no longer has the luster it once had. Attendance is down and so is the morale of Pistons fans.

What happened to the team that reached the Eastern Conference Finals six times?

What happened to the team that won the 2004 World Championship and staged one of the biggest upsets in NBA history?

What happened to the team that was relevant from 2004-08 and top contenders in the Eastern Conference Division year-in-and-year-out?

That's the team the people of Detroit have come to known.

The Pistons are nothing but bottom feeders of the East, playing solely for pride. Kuester will be out at the end of the season and the coaching carousel will start back up again. Pistons president of basketball operations Joe Dumars has his work cut out for him.

It should start with players who's hearts are in the right place.