Pithole City: A Boomtown that Burst with Personality

by Jonathan Burdick
View ProfileTwitterInstagramRSS Feed
May 22, 2019 at 3:00 PM 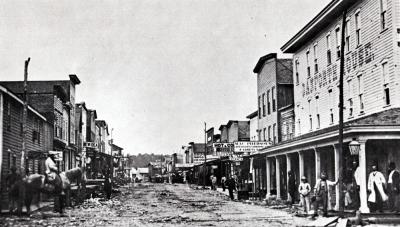 The true definition of a boomtown, the population of Pithole peaked at 15,000 less than two years after its establishment. Within a decade, it ceased to exist.

My grandmother and her two older sisters grew up in Plumer, Pennsylvania. It's a blink-and-you'll-miss-it populated place within Cornplanter Township, right in the heart of the Oil Region, only a short drive south of Titusville and bordering the eastern side of Oil Creek State Park.

She was born in the earliest years of the Great Depression. Her father, Clarence, worked the region's oil wells as a pumper, while her mother, Grace, managed the home. At times, they housed others who worked the wells. Plumer is serene, slow-paced, unpretentious, and somewhat isolated. It has a small country store, a small rural church with an accompanying cemetery (where my great-grandparents are buried), an old garage, and a scattering of homesteads.

My grandmother's sisters married and moved the 10-mile drive into Titusville, where they raised their children. My grandmother also married, but they moved to Union City, where they would raise my mother and her three brothers.

As a result, I spent many weekends and summer days in Union City. Since Titusville was only a quick drive down Route 8, we would often go visit with her sisters. For me as a kid, there was always something a bit otherworldly about those drives: the sheer amount of old buildings, the massive oil-era mansions, the variety of architectural styles. I didn't understand at the time why, but Titusville somehow felt different.

That's because the Oil Region is different. It is an essential, yet often overlooked day trip for anyone in our area, for the incredible history and scenery, but also the modern offerings. In Titusville and the surrounding area, there are numerous parks and trails, great restaurants, a locally-owned escape room, and even a place to make a night out of the trip called the Caboose Hotel where each of the 21 rooms are — you guessed it — renovated train caboose cars.

For beer connoisseurs, there is Orr's Brewing Company, which opened in 2017 within the historic Towne Square Building (recently renovated after a devastating fire). If one makes the trip before late-June, they can walk less than 50 feet to say goodbye to the beloved Blue Canoe Brewery before its doors close and the location transforms into the Lavery Brewing Lager Haus.

The history is still the highlight of the trip, of course. One can spend hours driving through the many neighborhoods admiring the old homes and architecture. The Drake Well Museum & Park is a history buff favorite, which not only has exhibits and an impressive exact replica of Drake's engine house, but also includes picnic and fishing areas with numerous trails for biking and hiking. A trip to the Oil Region isn't complete without the three-hour round-trip train ride on the vintage Pullman train cars of the Oil Creek & Titusville Railroad (a childhood memory with my parents and brothers that stands out).

One can also visit the newly rehabilitated Tarbell House, the teenage home of legendary muckraking journalist Ida Tarbell, who in 1869 moved with her family to Titusville for her father's pursuits in the oil industry. Her father built the Italianate-style house himself using lumber from the Bonta Hotel — a once popular establishment that had been part of an oil boomtown between Titusville and Oil City.

That boomtown was a place called Pithole City.

Located east of Titusville and a few miles northeast of Plumer, Pithole is a story just waiting to be adapted into a prestige premium cable drama (call me, HBO).

It was only a few short months before the Civil War's end in 1865 that a man named Thomas H. Brown struck oil on a farm not far from Titusville in an area that was mostly still wilderness. Within days, speculators descended upon the area, clearing out the forest in their quest for quick fortune.

That first well was producing 200 barrels a day at eight dollars per barrel. As more and more wells were discovered, more and more people arrived. A hillside city of 500 lots and 22 streets was planned as the oil continued to flow. A well that was struck that August became the largest ever in the region, producing over 1,000 barrels each of its first few days. Within a year, an entire city had sprung up with over 15,000 people of all races and ethnicities and personal interests: speculators, teamsters, preachers, doctors, bankers, veterans, drifters, and more.

Charles C. Leonard, who wrote for the newspaper, published an early history of Pithole in 1867. "There was so much oil flowing from the wells and so many people," he wrote, "that clean water was difficult to obtain." He explained how there were so many people that the operations appeared like massive armies, miles long stretches of people and wagons transporting oil from the wells to the railroad on nearly impassable roads — a feat that became so inefficient, it led to the creation of the world's first oil pipeline.

"At first sight, it seems that every available spot of ground is occupied by these lofty and skeleton-like [oil derricks], so near together that it appears impossible for a wagon to drive between them," he described.

Within the city, which was drowning in mud, he noted how poorly built the structures were, many of which were erected in a single day.

"It is a wooden town, not a brick or stone house in it. The streets are narrow, with but a single plank for a sidewalk ... The smell of new lumber, fresh paint, and the 'crude' is everywhere."

Since buildings couldn't be built fast enough for the exploding population, tent cities sprung up all over the hillsides.

"Where so many different characters and nations were represented, much lawlessness necessarily prevailed," he continued. "[G]ambling, robbery, and shootings were of frequent occurrence." He recounted how before a police force was organized, a "self-appointed vigilance committee dealt justice to rogues in Texan or Californian frontier style."

Of those historical characters, Kate LeCounte (also known as French Kate) and Ben Hogan are two who could have been plucked straight out of an episode of Deadwood.

"Ben Hogan was there in the height of his fame and glory," William McKnight, an esteemed doctor from Brookeville who was in Pithole for a short stint, wrote in 1910. "[H]is hotel was the largest and vilest den in the city." 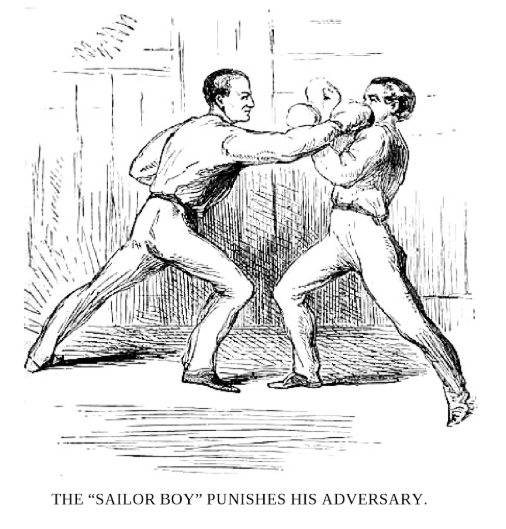 Ben Hogan, the "wickedest man in the world." boxing

"If I made up the characters of Kate and Ben, I'd be accused of it being way too far out there to be taken seriously," says Lori Twichell, who grew up in Titusville but now is a screenwriter as well as the owner of a marketing company in San Antonio.

Twichell grew up hearing these stories, but it wasn't until she was back visiting and exploring her childhood hometown with her own children and saw their fascination that she recognized the uniqueness of where she was raised.

"To me, [Pithole] was just a field we went to for field trips all the time," Twichell says. Her children loved it though and she began imagining the story on the screen. So, she did just that: intertwining a fictional story set in Pithole with the very real characters of French Kate and Ben Hogan.

"Built like a bull and just as strong," Carl Burgchardt wrote of Hogan in his 1989 profile of him. "[H]is specialty was to have an 800 pound stone of block broken on his chest with a sledgehammer."

The German-born Hogan was hardly a protagonist. In fact, he was the self-proclaimed "wickedest man in the world." He had been a Confederate deserter who later in life claimed to have been a spy for the Union. Kate was a former dancer and career criminal with a sharp mind who stood out in Pithole with her elegant clothing and fine jewelry. She was described in one 1909 publication as an "olden time vampire" who once had John Wilkes Booth as one of her dupes.

"She was an educated woman, moreover, speaking six or seven different languages," one Pithole resident who knew her claimed.

When Hogan arrived at Pithole, he felt at home and immediately made a name for himself as a fighter, both in the street and as entertainment in the ring. He challenged anyone who dared to try and last three rounds with him.

Soon, he and Kate began operating establishments in Pithole meant to cater to "the depraved tastes of men." Violence was common in these dives. In one particularly disturbing case, Hogan kidnapped a young woman, holding her against her will until her mother personally came to Pithole with a mob of men to rescue her.

When a murder took place in the city, Hogan was often blamed. "[W]hen the matter was called to his attention, he used to shrug his gorilla-like shoulders, shift his cud, and ask 'em what they were going to do about it," one person claimed.

In Hogan though, Twichell sees a story of redemption. After he left Pithole (and experienced a famous brawl at his Tidioute brothel Babylon Hill that ended with French Kate shooting two men), he found religion and changed his ways, which also meant losing Kate. "I cannot imagine a more intriguing story than that of 'the most wicked man in the world' getting religion and ending up being mentored by [famous evangelist] D.L. Moody."

Lee Deeter is the program manager with the Friends of Drake Well, Inc., which operates the Pithole Visitor Center today. He understands the attraction visitors have to its story.

"I think most visitors are most interested in just how fast the city came and went and what it was able to accomplish in the short time that it was there," he says. "It is mind boggling that in 500 days, a buckwheat field turned into a city of 15,000 and plummeted back to 2,000 people and within 10 years had disappeared completely."

"To me the most interesting part of the story is the people," Deeter continues. "Not just the fact that there were so many of them, but that there are so many fascinating characters and countless more we may never know about."

While little of Pithole remains today, the museum has a highly-detailed diorama of the city at its peak.

"It is a great model and really puts it all into perspective," Deeter says. "You can look out at what is there now and see where all of the buildings and businesses would have been. … A lot of people also take the time to look at it closely and pick out some of the interesting little details that are in it."

Whether its Pithole, Plumer, Titusville, Oil City, or any of the numerous townships in between, the Oil Region perhaps describes 19th century America as well as any other.

Twichell says that when she was last in town, she made sure that she no longer took her hometown for granted. She took countless photos and hours of video so she could "try and explain [to people back in Texas] that 'normal every day people' live in oil mansions and they are all over Titusville."

It's easy to take the Oil Region for granted while living here, but we shouldn't either.

I'll see you at the train station. 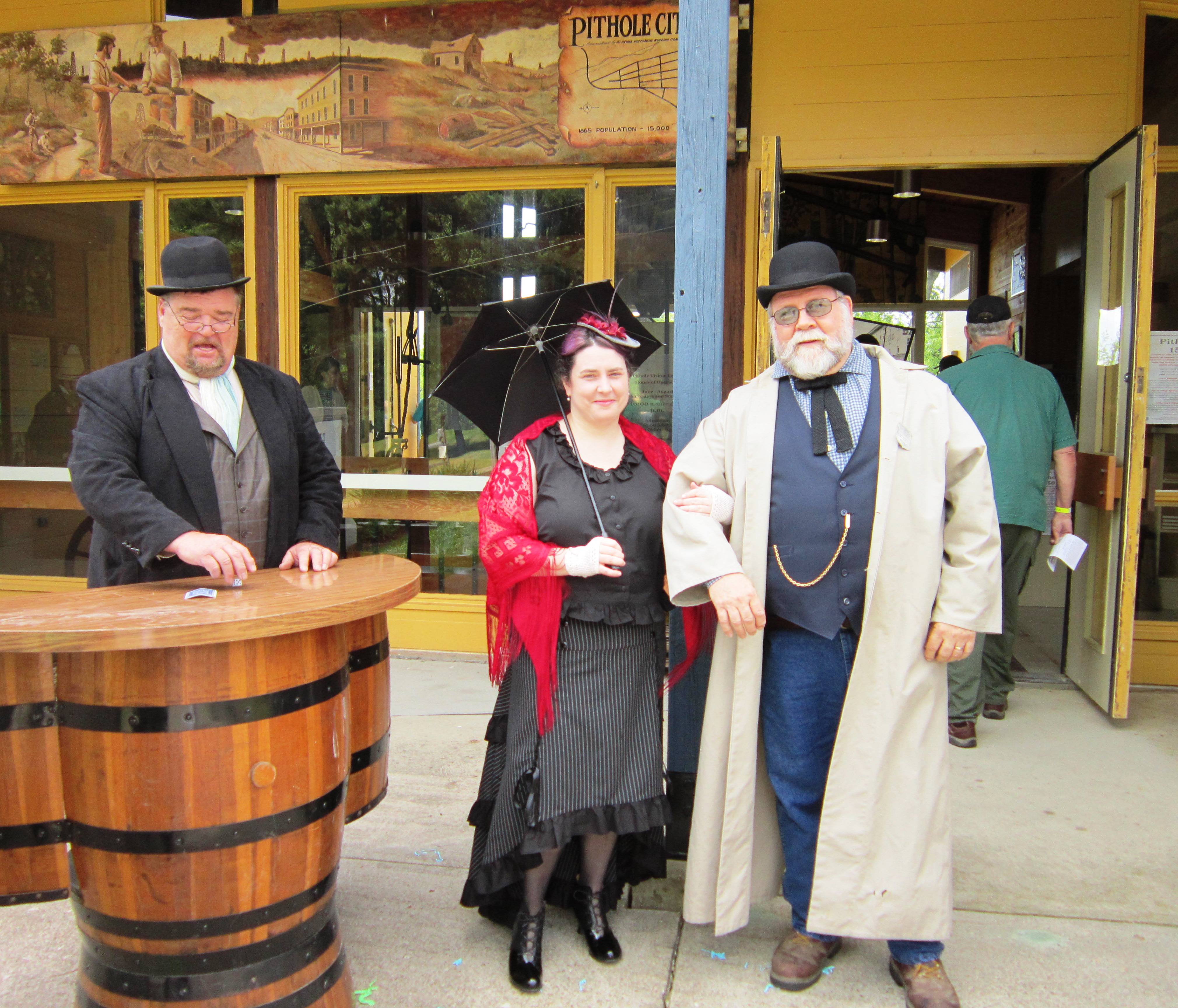 Murder on the Orient Express

The Last Days of Judas Iscariot by Stephen Adly Guirgis

Going Attractions: The Definitive Story of the Movie Palace Documentary

by Symoné Crockett2/26/2020, 2:00 PM
A multi-media production that exposes and responds to racial injustices in the community

Leap Up for Erie Zoo Reopening