The holiday classic is coming to Erie's LECOM Stage

by Nick Warren
View ProfileTwitterInstagramRSS Feed
December 2, 2021 at 10:00 AM 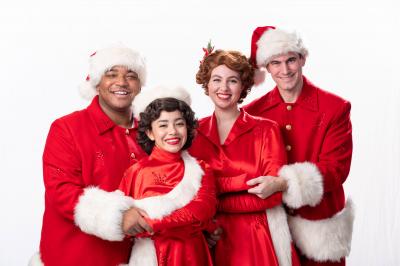 The Erie Playhouse is getting ready for the holiday season with a production of none other than Irving Berlin's White Christmas.

The stage play is based on the hit 1954 film from Paramount Pictures, which was itself formed around the astounding success of the title track. Originally performed in 1941, the song later appeared on the soundtrack to the film Holiday Inn August of the next year. That fall, it spent 11 weeks at number one on the Billboard Chart. It was said to resonate deeply with U.S. servicemen overseas fighting World War II.

It's no coincidence, then, that the show centers around two WWII veterans. Bob Wallace (Richard Kress) saves the life of Phil Davis (Aaron Holman), and reluctantly agrees to form a song-and-dance duo with Davis. A few years later, they meet singing duo of sisters, Betty (Claire DeArmitt) and Judy Hayes (Rose Pregler Hitt), and convince them to go with them to their upcoming gig in an unseasonably warm Vermont. To their surprise, the inn is run by their old boss General Waverly (JR Fabin). Hearts are broken and reconciled eventually the snow falls providing a truly white Christmas.

The staged musical version of the film hit the U.S. in 2004, 50 years after the film's release in 1954. It of course includes other well-known hit songs like "Happy Holiday," "Blue Skies," and "I've Got My Love to Keep Me Warm."

The production features a 25-member cast, with direction and choreography by Richard Davis and assistant director John Burton. Heidi Sheehan provided additional tap choreography, while Joe Hassler designed and painted the beautiful sets. The show's costumes were done by Ryan Ingram and Crystal Corritore, with vocal direction by Rhonda Berlin, and musical direction by Andrew Rainbow.