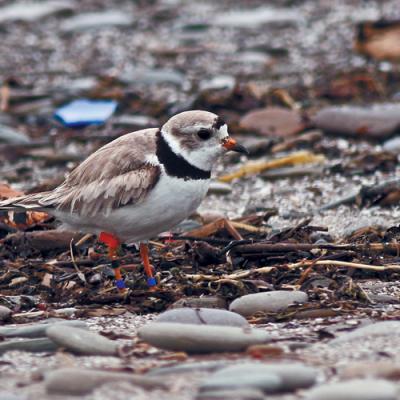 We are slowly motoring in a skiff along the eastern side of Ambergris Cay in the Berry Islands of the Bahamas. The water is turquoise, the sand is soft and white. The temperature is in the low 80s. It is January 31. Yes, I am very, very lucky.

With me are Walker Golder, the Deputy Director of Audubon North Carolina, and Sarah Sargent, Program Manager for Bird Conservation at Audubon Pennsylvania. We are here to find the elusive piping plover, a bird that breeds across the northern U.S. and Canada, but wings south for the winter, to Florida or the Bahamas – a magnificent journey for a bird weighing about two ounces.

They are elusive because their existence is threatened; as of 2012, the aggregate number of all the piping plovers existing in the world was roughly 8,000 birds. Which is why, to better understand plovers' condition, an international census is conducted every five years to find and count plovers on their wintering grounds.

Golder, Sargent, and I are part of a group of hundreds of scientists, birders, and volunteers spread out across the Bahamas in search of this remarkable bird. The team not only counts plovers, it also evaluates the habitat and looks for evidence of intrusions – such as invasive species and human development – threatening the slim slivers of beach they call home for six months.

Piping plovers are classified as shorebirds, meaning they spend most of their time near the water to feed, rest, and breed. They are small and chunky, about six and one-half inches long, and are mostly white and a sandy gray with black accents.

The Great Lakes population of plovers, which we track at Presque Isle State Park, is the most critically endangered of the three distinct North American groups. The birds summering on the Atlantic coast and in the Great Plains account for most of the 8,000 birds mentioned above. The Great Lakes population accounts for a mere 3.6 percent of that total. So, besides our search for all piping plovers, Sargent and I are hoping to find some Great Lakes plovers.

As we close in on the southern tip of Ambergris, a small group of birds skitters along the shore. We disembark and slowly make our way towards the group of birds roosting on the beach. As we near them, it becomes apparent hundreds of shorebirds are roosting, including what looks like a healthy flock of piping plovers. Pay dirt.

After three hours of standing bent over our spotting scopes, we have counted and recounted every bird species on the beach, and have recorded on paper and with photographs every piping plover we can find with identifying bands on their legs. We have found 211 plovers, six of them banded. Most exciting for us is finding two birds that hail from the Great Lakes population.

Two doesn't seem like many, but finding a Great Lakes plover is always exciting since we see so few of them here at Presque Isle. From April to June each year I have a part-time job with Audubon Pennsylvania as a shorebird monitor at the park. This means a daily walk from the lighthouse to Gull Point – designated as critical habitat by the U.S. Fish and Wildlife Service – looking for plovers stopping by to feed or looking for a place to nest. We often see five or fewer each year.

In 1986 when the plover was first listed as endangered, the Great Lakes population had only 17 known pairs – 34 birds total. Once nesting throughout the Great Lakes, including at Gull Point at Presque Isle until the 1950s, the remaining 34 birds were only living in a small area of northwest Michigan.

In 2015, after much effort on the part of conservationists, the plovers reached a new high of 75 nesting pairs. They have also re-expanded their range to the shores of all the Great Lakes, except Erie. Those 75 parents fledged 128 chicks and seven more chicks were raised by hand after their nests or parents were compromised.

At the end of last summer, then, there were about 285 Great Lakes piping plovers in the entire world.

Those of us who follow the modest comeback of piping plovers are cautiously hopeful that Lake Erie will once again host a pair or more. Work over the past few years to eliminate invasive plant species at Gull Point has improved the habitat there. Last June, one piping plover (I named him Blue Boy) stayed for about two weeks. Alas, no female ever showed up to join him.

Blue Boy is just one small bird, but he represents the entire, albeit small, population to me. When we saw some of his fellow Great Lakes plovers in the Bahamas, I got a first-hand look at the marvelous journey these birds make every year. The Great Lakes birds we saw on Ambergris flew more than 1,400 miles from northwest Michigan. The birds going to Florida only fly 100 miles fewer.

In the Bahamas, I felt a little bit more the dangers and risks these birds take to act out their ingrained instinct. The surrounding ocean felt bigger, vulnerability whistled in the constant ocean wind. Home felt farther away.

While standing there watching in the Bahamas, I felt as if I migrated with them; felt a little bit more the dangers and risks they take to act out their ingrained instinct. The surrounding ocean felt bigger, vulnerability whistled in the constant ocean wind. Home felt farther away.

This is a good and humble thing for a human to feel.

And that feeling reframed for me the importance of Gull Point yet again. Although small – Gull Point comprises just 67 of the 3,112 acres of the park – it is the only place in Pennsylvania where the habitat is appropriate for piping plovers to nest. It should be a point of pride for all of us to host these rare birds and we should do all we can to welcome them here.

In other words: Yes, we are very, very lucky.