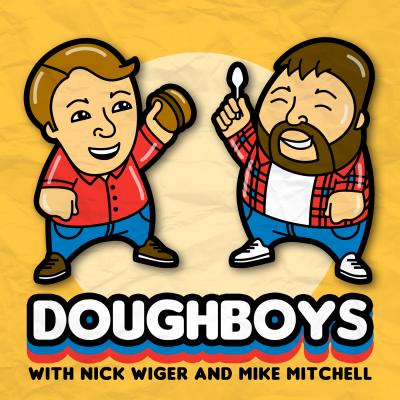 Considering the amount of love the staff of this publication has for Doughboys, it's kind of shocking we're just now getting around to recognizing it, but also fitting considering the podcast's major achievement this year. Let's start with the basics: hosted by comedic personalities and "friends" Nick Wiger and Mike Mitchell, Doughboys is a podcast about chain restaurants that invites a guest on to review a franchise with them each week. Simple enough, right?

As with all great podcasts, only about half of any given Doughboys episode is actually about the restaurant they're reviewing. The other half is filled with excessively detailed background information, roasts, "drops" (or audio segments put together by listeners), song parodies, games, mailbag sentiments, and of course, countless inside jokes. Beyond that, Mitchell and Wiger become increasingly antagonistic toward one another as the show goes on, resulting in increasingly hilarious and personal jabs.

The reason they deserve podcast of the year? Their 24-hour Doughathon raised over $184,000 for the Restaurant Workers' Community Foundation during the pandemic. As much as these hosts may try to convince you their podcast isn't funny, as the ninth most popular podcast on Patreon, they've captured the laughs and hearts of many. (As a starting point, we recommend "KFC with Paul F. Tompkins" and "Wendy's with Paul Rust.") — Aaron Mook