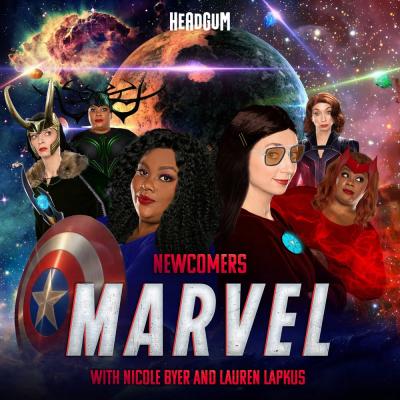 Lauren Lapkus (Threedom) and Nicole Byer (Why Won't You Date Me?) have centered the next chapter of their prolific podcasting careers on having fresh eyes. This concept drives Newcomers, a show in which they explore cultural phenomenons (Star Wars, Lord of the Rings, the Corona-loving "family" that drives really, really fast) they're oblivious to.

The show's latest season brings them to the Marvel Cinematic Universe. And before opener Iron Man, Nicole had seen 3 of 28 films, while Lauren had (quite randomly) only seen Black Panther and Captain Marvel.

Currently ongoing, their weekly installments feature MCU news (their live trailer commentaries are always highlights), a detailed summary and reaction to the movie, and stellar guests like Jason Mantzoukas (How Did This Get Made?) and Eugene Cordero (recently in Loki, who also guested on the Thor episode). Whether or not MCU movies are actually funny is a constant debate (Lauren is a little more forgiving than Nicole on this topic), while listening to our hosts trying to dissect convoluted Marvel lore is predictably hilarious.

If you're a big comics fan, fair warning, you might get frustrated by the show. At one point, Nicole calls the super soldier serum "first draft shit." But, if you can embrace the fresh eyes perspective, it's like experiencing the MCU all over again. — Chris Lantinen