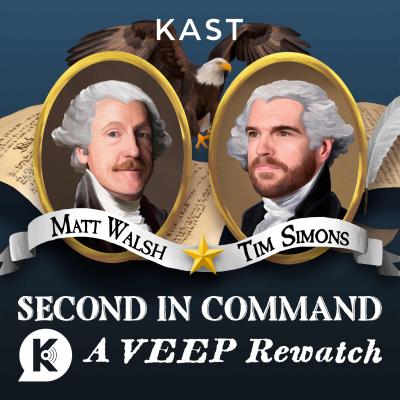 Okay, maybe I'm just a sucker for television rewatch podcasts, especially ones that feature actual alumni from the show. The newly-launched Second In Command is one of those, a rewatch of the massively acclaimed series Veep. During its run, the show was a virtual Emmy machine, winning 17 during its time. Not only did hosts Matt Walsh and Timothy Simons co-star in all seven seasons of the show, but they're master improvisers (Walsh even being a co-founder of the Upright Citizens Brigade). Dictated by the form of the show itself, Veep became a haven for some of the best comic improvisers in the world.

This was, of course, great for the show, but serves the podcast equally well. Walsh takes a much more passive, winking tone, with Simons characteristically bringing excitable energy to the mix.

The show moves chronologically through the series, and has barely scratched the first season. So far, they've featured Tony Hale (Arrested Development) as a guest star, who played Meyer's personal assistant, Gary, along with Reid Scott (Venom)

In their roles of director of communications Mike McLintock and White House intern and later (spoiler alert) Congressman Jonah Ryan, the hosts themselves were a pivotal part of the show, but are quick to point out that they're on the lowest rung of power, with top spots given to showrunner Armando Iannucci (The Thick of It, In the Loop), and who else but Selina Meyer herself, Julia Louis-Dreyfus (Seinfeld).