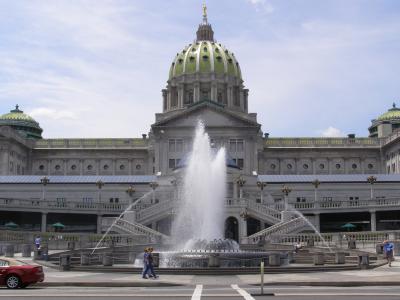 Most political sex scandals include some sort of gratuitous sex act involving a politician. Bill Clinton rattled Monica with a Cuban cigar in the Oval Office during a federal work stoppage; Andrew Weiner sexted college coeds from the congressional locker room; and Eliot Spitzer needed an escort to find his way back to Albany.

I'm not sure whether to feel aroused about the Commonwealth's surreptitious entry into the national sex spotlight, or to retreat into seclusion with my lubricating tears of shame.

An investigation by Pennsylvania Attorney General Kathleen Kane's office identified 30 individuals previously affiliated with Governor Tom Corbett's office when he was Attorney General, prior to 2010 when he led a team that was apparently doing anything other than prosecuting Jerry Sandusky.

Emails also contained parodies of those ubiquitous motivational posters, the ones with the rock climber and text reading "Devotion." Only in these posters the rock climber was replaced by images of secretaries engaging in workplace acts of..."devotion" toward their bosses, according to the Philadelphia Daily news.

Fear not conservatives, this is a bipartisan scandal and there's plenty of misogyny to go around.

Earlier this week the Chief Justice of the Pennsylvania Supreme Court, Ron Castille, a Republican, outed Associate Justice Seamus McCaffery, a Democrat, as a member of an email inner circle with more than 200 contributions to Supreme Court servers.

So it seems that there is an epidemic at hand which only swift release of megabits can cure.

I do wonder, if Justice McCaffery can call the transmission of 234 pornographic emails from his Court email account a "lapse of judgement," what can the rest of us get away with at work, legally citing McCaffery as precedent? Ponder that. I've got to go clean out my inbox.