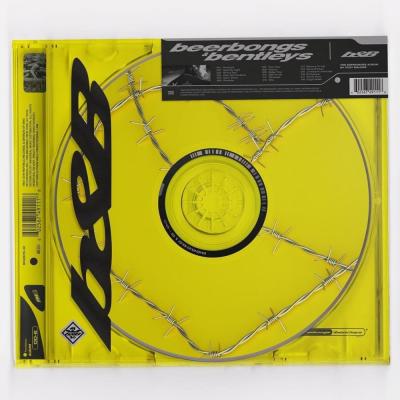 Post Malone's sophomore album, beerbongs & bentleys, is the musical equivalent of a Michael Bay film. Take this as you will; for some, the album's nearly indistinguishable 18 songs — much like a Transformers film, which does nothing to justify its length — will be more of what fans love from the 22-year-old singer/songwriter/rapper. For others, the album will prove to be a grating experience, no buts about it — non-fans need not apply. The recipe for a Post Malone song is rather straightforward: take one of Malone's formidable bleating hooks (the man sings like a goat), add two verses about partying, pour over a distorted beat with trap drums and garnish with a blockbuster-sized feature to outdo the man on his own track. Deviations from this formula are few and far between; highlights include the three-song stretch of "Otherside" through "Blame It On Me," including the somewhat stunning acoustic ballad "Stay." But on opening track "Paranoid," Malone drops corny lines about "politicians and their lies," and on "Spoil My Night," he undercuts a refreshing guest verse from Swae Lee with a line about "beautiful boobies." These moments highlight Malone's worst habit: self-sabotage. — Aaron Mook

Sløtface // Sorry For The Late Reply

Enjoy Songs for Old Souls with Alyssa Hankey at Lavery

From One City 2 The Next at BT

Half Glass and Penny Racer Drive to Fill the Rook