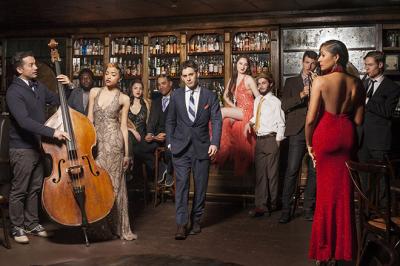 Macklemore and Ryan Lewis' debut hit single "Thrift Shop" dropped in 2012, an ode to the musty and antiquated that flew in the face of the "so fresh and so clean-clean" of hip hop convention. It proved the ideal breakthrough for musician, pianist, and arranger Scott Bradlee, whose Postmodern Jukebox (PMJ) project had already been taking your grandpa's style(s) for years prior. Together with a rotating cast of collaborators, Bradlee dresses popular songs of today in musical fashions handed down from the golden age of jazz and swing. Imagine listening to your favorite hit radio station in the Victrola era and you'll have a good idea.

Since that stride piano-laden (1920s-inspired) cover of "Thrift Shop" launched PMJ's YouTube channel in 2013, the group's uploads have garnered over 750 million views and won over 3 million subscribers (and counting). They have performed on Good Morning America, been featured on NPR Music and NBC News, and ascended the iTunes Charts with all 14 of their releases since 2014. That's right — 14 releases; PMJ uploads a new cover weekly, so they add up fast. Recent examples include Gnarls Barkley's "Crazy" as a 1950s torch song, Bruno Mars' "That's What I Like" in the style of the Rat Pack, and Taylor Swift's "Look What You Made Me Do" repurposed as a James Bond opening sequence theme. Even if you detest Top 40 radio, you'll be astonished how well these songs hold up after being re-contextualized.

Mercyhurst's Mary D'Angelo Performing Arts Center will become the swingin'est speakeasy (minus the bathtub gin) in the 48 contiguous states when they invite the wildly inventive ensemble to the stage as a late addition to the MIAC (Mercyhurst Institute for Arts & Culture) 2017-18 season. By the time you read this, most (if not all) of the tickets will be as good as gone, but those interested can call the MIAC box office to check for any last-second availability. Even if you've only got $20 in your pocket, you're well on your way to a show that, by most accounts, is freaking awesome. — Matt Swanseger