The potty-mouthed princesses are back and they've f@#%ing had it with domestic violence. 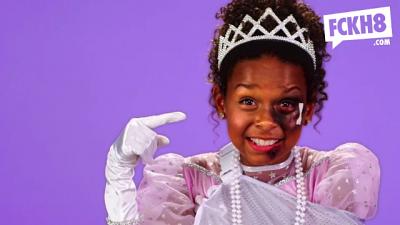 The potty-mouthed princesses are back for an encore.

The last video, called "F-bombs for Feminism," has more than 1.3 million views on YouTube.

You'll recall these adolescent foul mouthed females made their debut last month to a cavalcade of criticism that ranged from dismantling the message to impeaching their parents.

The videos are actually promotional campaigns for FCKH8.com, a t-shirt company. The for-profit sloganeers have a socially conscious business model that donates the proceeds of different products to different organizations.

The new campaign, "Break the Silence on Domestic Violence," ups the ante on the offensive.

There's a visual element that punctuates the creative vocabulary.

The video opens with a young boy swilling from a beer bottle while wearing a stained white tank top - the quintessential "wife beater" - while telling lude jokes about women.

In the event that the kids aren't enough for you, the princesses now have black eyes, bruises, and bloody lips.

If this is going to be the next great moral debate, you might as well have it here.

Once again, comments, obscene or otherwise, can be sent to jWertz@ErieReader.com or tweeted @jim_wertz. Style points will be awarded.