Power Behind the Throne: 'The Favourite' is a Different Kind of Period Piece 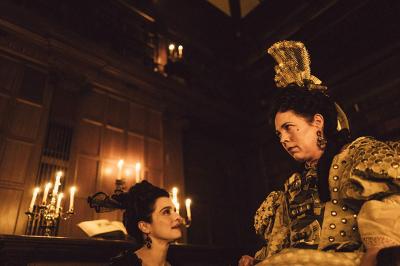 The films of Yorgos Lanthimos (Dogtooth, The Lobster) are some of the strangest in recent memory. A part of the so-called "Greek Weird Wave," Lanthimos uses the absurdity of his stories to make deeper social statements. His newest film, The Favourite is both his highest-budget and most easily accessible film, but it is by no means any less sardonic. In fact, thanks to some clever writing and three brilliant performances, I think it may be his best film yet.
Set during the War of Spanish Succession in the early 18th century, the film concerns the friendship between Queen Anne (an incredible Olivia Colman) and Lady Sarah (Rachel Weisz). Sarah serves as the queen's confidant during parliamentary meetings, offering her advice but also pushing her own political agendas. However, this relationship is thrown into turmoil when Sarah's commoner cousin Abigail (Emma Stone) comes to the palace looking for employment but with some hidden agendas of her own. The resulting rivalry for the queen's affections will leave all three women damaged in more ways than one.
The film relies completely on the performances of its three leading ladies and Colman, Weisz, and Stone are more than up to the task. Colman is clearly having a blast with her demented but tragic role. Meanwhile, Weisz's Sarah seems harsh and brutal to the queen but there's obviously genuine love there. Stone's Abigail has no problem being a subservient sycophant if it means getting what she wants. The film's anachronistic scenes and dialogue prove that this film is after something beyond a simple period piece. Is Lanthimos using this tale to satirize the modern political landscape? Whether he is or not, The Favourite makes for an entertaining watch. — Forest Taylor

More Than Meets the Eye?: 'Bumblebee' is the Best Transformers Movie ... but is it Good?