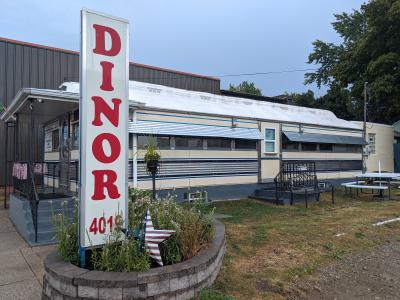 Pepperoni balls, ox roast, sponge candy … "dinors?" There are some things in this world that are unique to Erie alone. A diner certainly isn't, but the strange way of spelling it is. Almost all of the old, mid-century diners in Erie are spelled that way. No one knows for sure, but some speculate that it is an old typo that caught on or some German derivative, but one thing is certain: it's only spelled that way in Northwestern Pennsylvania. The spelling of the word isn't the only thing that is unique about the "dinor" on Main Street in Lawrence Park. This 1948 prefabricated, train car-style diner has been a part of the fabric of the township for so long, it has secured its place in local and national history. It was placed on the National Register of Historic Places in 2004 and is the only diner in Pennsylvania to hold such a distinction.

The current owners, Becky and Rick Standley, were drawn to the Lawrence Park Dinor because of its long history and old-timey feel. In 2010, the couple found themselves at a crossroads in their lives as Becky lost her job in manufacturing and, after much deliberation, they decided to take the risk and buy the Dinor. It was up for sale because former owner George Gourlais, who ran the Dinor for nearly 20 years, was ready to retire. Rick had to do a bit of convincing as neither he nor Becky had any restaurant management or professional cooking experience. "I do come from a long history of this kind of work," Becky reflects. "My grandparents owned a tavern in Lackawanna and my parents owned the Dairy Delite in McKean in the '80s as well as a tiny bar called the Blue Star Tavern, so I kind of had it in my blood." After purchasing the Dinor, Becky worked side by side with Gourlais for a month to learn the ropes. Rick took photos of all the recipes and videos of the processes. They have mostly kept the menu the same, with some small tweaks, otherwise very little has changed over the years.

The same is true for the look of the Dinor. Its charm is in the original feel; if you picture a 1950s diner in your head it will likely look and feel an awful lot like the Lawrence Park Dinor. It was originally manufactured by Silk City Diners which was a division of the Paterson Vehicle Company in Paterson New Jersey. They produced 1,500 diners from 1926-1966 that were shipped all over the US. The exterior of the Dinor is porcelain enamel with a fluted stainless steel band and a monitor roof that runs its length and two stainless steel doors with porthole windows. The interior of the Dinor has a long counter with barstools and an open, stainless steel kitchen, with booths along the windows. The vaulted ceiling is made up of curved porcelain panels. Pretty much all of the original character of the Lawrence Park Dinor remains as intended.

The Standleys spent a lot of time restoring the exterior of the Dinor, which was painted over many times through the course of the last 72 years. They stripped off two layers of white paint, a layer of red, and a layer of blue to uncover the original porcelain enamel. Rick also points out that the interior ceiling is still the unpainted porcelain, and all the tile on the floors, counter kick plate, and bathrooms is vintage. The restaurant also still uses the original stainless steel refrigerators, steam table, cooktop, backsplash, milk cooler, and drawers. All of the mechanisms and compressors inside the appliances have been modernized, but they still retain the old-time look that gives the Dinor its charm.

When the Standleys first purchased the Dinor, they received a letter from the son of the original owners, Larry Curtis, who now lives in Texas, giving them some early history. His mother and father originally paid $20,000 for it in 1948, when it was delivered and set on it's foundation at 4019 Main St. The Curtis family lived in a little one-bedroom house that sits behind the Dinor to this day. They chose Lawrence Park for the location in order to cater to the massive workforce at GE at the time. The Dinor ran 24 hours back then to accommodate all shifts at the plant. In their first year of business in 1948, they made over $70,000. That amount would equate to approximately $750,000 today which is very impressive, as the fare at the Dinor then and now is modestly priced.

"One of the things I like about the Dinor, is that it is basically recession-proof," Rick explains. "Even if something happens to the economy, people will still want to go out to eat, but they'll do it on a tighter budget." The Dinor will always accommodate that tight budget, with its affordable prices and food without pretension. And they have enjoyed great success during their ownership. They have been Trip Advisor's top restaurant in Erie for 7 years running. As a result, they get a lot of traffic from out-of-towners. When they took ownership of the Dinor, they made the decision to be open on Sundays and, in doing so, nearly doubled their business.

Not only is the Dinor recession-proof, it seems it is pandemic-proof as well. After the initial shut down in March, the Lawrence Park Dinor remained closed for 3 months, deciding on how best to move forward. The Standleys were in the fortunate position to not have a mortgage on the Dinor and since Rick was still employed elsewhere, they took their time and reopened in June with all the precautions in place. They temporarily removed the original side door (safely storing it for its eventual return) and installed a pick up window in its place. They built plexiglass dividers between the booths. The barstools are marked off to allow for social distancing and there are plexiglass barriers hanging between the counter and the cooking area. Once summer arrived, they converted the small grassy area between the Dinor and the parking lot into an outdoor seating area. All in all, they adjusted quickly and well to the changes, so much so that they had met their goal of reaching 50 percent of their monthly sales for July by mid-month.

The pandemic less adversely affected the business than it did a long-term personal goal that was within sight: retirement. Before COVID hit, the Standleys had placed the Dinor up for sale. Becky was ready to be done with the all-day-everyday work of the restaurant and was looking forward to spending more time with her grandchildren. At the beginning of March, it seemed like that goal was about to become a reality when an offer came in. And then, right before they were able to close on the deal, the stay-at-home order went into effect and it all got put on hold. After reopening, the bank was reluctant, set multiple parameters the business needed to meet (which they did) but then ultimately rescinded the deal amidst the uncertainty of the restaurant business during an unpredictable pandemic. So for now, those plans of retirement are on hold and Becky and Rick will continue on until, hopefully, they can find a cash buyer or the pandemic ends. Either way, you can sense Becky's disappointment. She was ready to be done and pass the torch (as well as the recipes, techniques, and historic building) on to a new owner.

In the meantime, the Standleys plan to keep the Dinor open and running — and continue making food that people keep coming back for, whether it is for dining in, dining outside, or to go. The typical diner fare, such as club sandwiches and old fashioned milkshakes, is all accounted for on the Dinor's menu. But what people really love most are Becky's homemade soups and pie — and, of course, another famously Erie phenomenon in "Greek Sauce," available traditionally on burgers and dogs, but here also in omelette form. Becky and Rick plan to help the new owner just like Gourlais helped them, to teach them the recipes and processes so the Dinor can continue to provide consistently good, comforting, affordable food for the people of Lawrence Park and beyond well into the future.