Developing critical social skills at an early age through play and learning. 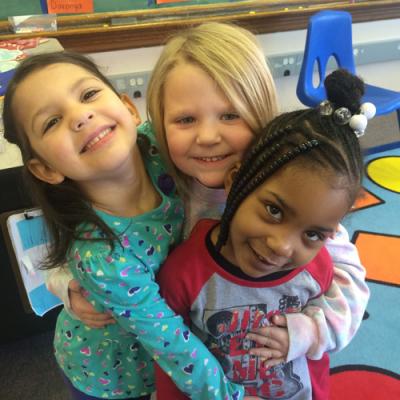 Perry Elementary's pre-K classroom was buzzing with activity – it looks a bit like play, and it looks a lot like fun, but there is a clearly defined mission: student success in the formative educational years to come. It was the middle of "activity center" time, during which students self organize, go where they want, and do mostly as they please, as long as the activities are constructive and purposeful.

From 8 a.m. to 2 p.m., students engage in a multitude of activities from writing their names on a chalkboard next to their name tags as a form of practice in both handwriting and spelling, to student-selected independent and small-group activities – like activity centers – designed to reinforce teacher-led instruction and lessons from daily reading exercises. The teacher's role during these activities is to facilitate the activities and monitor the language the children use to ensure that their vocabulary is expanding and being used in an appropriate way. 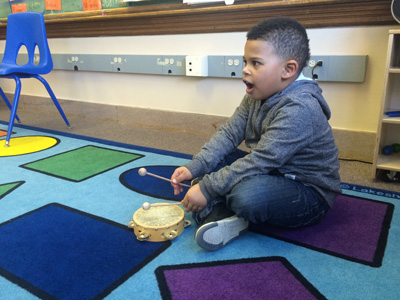 On the morning I arrived at Perry Elementary, the mostly four-year-old students were scattered throughout the classroom in what can best be described as organized chaos. But at the heart of the chaos sit the keys to future success. That's because pre-K education isn't about rote memorization of letters and numbers, it's about helping students develop social skills and beginning the process of creating independent learners.

"The social skills that the children develop in activity centers is really amazing," says Peggie Conn, a prekindergarten and kindergarten coach for the Erie School District. "It's a routine day and the children know what to expect. After the first month of school, the kids kind of run the room."

That's essentially the definition of "high-quality" pre-K. Students are engaged in rigorous educational activity that prepares them for social and academic success in kindergarten and the first few years of elementary school that follow.

In the "block center" of the room, two boys constructed a dentist office from cardboard blocks. It was complete with a dentist and a patient and reflected a story they had read earlier that week about going to the dentist. A group of girls role-played in the "dramatic play center," acting out a different story. In the reading corner, a girl "read" independently on a blue patent leather couch as she listened to the story on headphones, an exercise that helps the kids identify words they hear as well as allowing them to model reading behavior. Across the room, from the reading cove, in the music corner, a girl and boy sang – what else – "Let it Go" from Disney's Frozen. 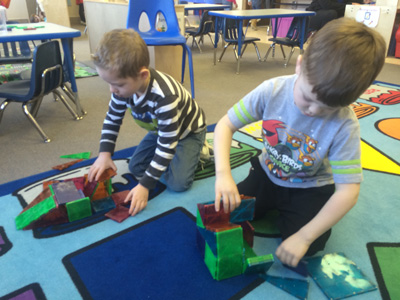 Yes, it's play. Yes, it's fun, but it is all in the name of preparing students for success when they get to kindergarten. Whether or not a child succeeds in kindergarten can lay the foundation for success or failure throughout that child's educational career. Appropriate or not, children who fail kindergarten have a stigma that follows them

throughout their elementary and secondary schooling, and the metrics for student success are often better measured in the home rather than in the classroom because it's level of attention, direction, and developmental assistance that children receive from their parents or guardians in the home directly correlates to how well prepared the child is to enter kindergarten.

Paradoxically, early childhood education is one of the few areas of economic transcendence between high-income and low-income families. High-income families have their choice of schools and programs while state and federal programs provide opportunities for children of low-income families to attend high-quality pre-K programs. In Erie County, 10 percent of children ages three and four are enrolled in high-quality pre-K and another 28 percent are enrolled in publicly funded programs.

"The greatest group that needs the greatest help are the children of working families whose parents are working every day, catching the early bus, but at the end of the month just don't have the resources to be able to commit to pre-K," says Erie attorney Ron DiNicola, who is co-chair with Erie businessman Nick Scott, Jr. of the NWPA faction of the Pre-K for PA campaign. "It is very much a middle-class program that helps those who need it the most and work the hardest." 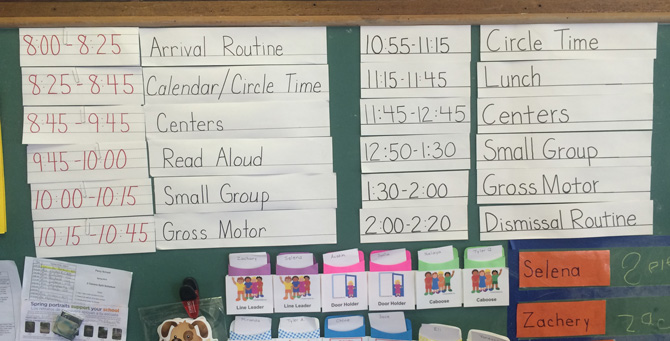 Pre-K for PA is an issue campaign that has brought together business leaders, civil leaders, and politicians with an array of ideological positions from across the state to push for public funding of universal high-quality pre-kindergarten education.

One of the most formidable groups of ad-hoc lobbyists for pre-K is a bipartisan coalition that would like to see universal pre-kindergarten for all three- and four-year olds in Pa.

It's an expensive proposition at a time when many in the legislature would rather champion austerity. But Pa. has fallen behind states like West Virginia, Oklahoma, and Georgia – places not commonly associated with educational success – in its commitment to high-quality pre-K. Campaign leaders argue that ignoring preparatory education for three- and four-year olds now could cost the Commonwealth an innumerable sum in the long term.

"This is not a partisan issue," says former Pa. Gov. Ed Rendell. "This is an issue that almost all people who care about the future of Pennsylvania care about. It's a budgetary issue that over the long run will save money."

Rendell is one of the many big names attached to the campaign. But he's joined by former Pa. Gov. Mark Schweiker and a cadre of stalwart Republicans from the business community that see a long-term economic benefit from universal pre-K education.

Those long-term savings include cost reductions for business owners on job training and preparedness, as well as a reduction in law enforcement and incarceration costs for those who don't find a place in the workforce and fall into alternative economies. 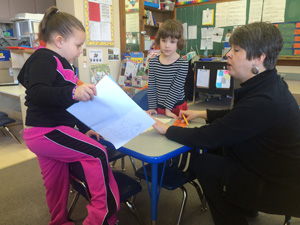 "For every dollar spent on quality pre-K education you avert the need to spend an estimated six to seven dollars on other priorities (like educational remediation, law enforcement, and correctional facilities),"

Rendell says. "So this is a very positive budget matter with broad based support."

Remediating students who are behind in their elementary school curriculum and repeating grades are both extremely expensive in comparison to the standard costs of public education. Children who fail one or more grades before third grade and read a grade or lower behind their peers are extremely unlikely to complete high school, according to a study published by the Center for Research on Effective Schooling for Disadvantaged Students at Johns Hopkins University.

Because no financial support exists for middle-income families who live above the poverty line but who don't have enough money to enroll their children in a high-quality pre-kindergarten program, 62 percent of three- and four-year old children in Erie County have no access to high quality pre-K. Statewide more than 70 percent of three- and four-year olds enter kindergarten without high-quality early childhood education.

In short, the disparity of enrollment in high-quality pre-K programs is creating an unlevel playing field in kindergarten. Middle-income families who can't afford high-quality pre-K are, in most cases, in search of daycare, often supplied by family members or peer support networks.

Again, high-quality pre-K is not daycare.

"It's basically a training ground for our educational system," says Nick Scott, Jr., vice president of Scott Enterprises. "Kids are showing up in kindergarten unprepared, and they stay behind for most of their time in school and many find themselves in the system. They're in trouble, they're incarcerated, and we end up paying for them in a whole different way. It's a pay now or pay later scenario, and it's a game-changer."

Children's brains are 90 percent developed by age five, making the pre-K years imperative for laying foundations of knowledge as well as educational practice. Pre-K curriculum teaches students to not only think for kindergarten, but also how to behave in kindergarten. By age five, a student's ability to meet the participatory expectations of the teachers is a big part of student success. Coupled with a vital period of creativity that all but recedes by the time a child reaches third grade, channeling the intellectual potential of three- and four-year olds is paramount to fostering success later in life.

Students are not automatically enrolled in pre-kindergarten, even if they are eligible. Reaching parents and making them aware of pre-K opportunities is also part of the process.

"Through Pre-K Counts we've yet to meet an eligible parent who isn't interested in placing their child in pre-K," says Cummings. "But it definitely takes a marketing effort to make people aware of the opportunity."

But those discussions come next. Pre-K for PA must first keep the initiative at the forefront of Gov. Wolf's education plan. Wolf publicly supports funding for universal pre-K for three- and four-year olds. But it must also convince the General Assembly that public funding for high-quality pre-K is where money must be spent. A series of opinion polls conducted around the 2014 midterm elections indicate that a majority of Pennsylvanians supports access to high-quality pre-K, and the groundswell of political and business support for the issue continues to grow.

The bellwether of support, however, will need to translate into the political will of those in the legislature against the backdrop of closing the budget gap and restoring K-12 funding. Gov. Wolf earmarked a significant first contribution of more than $100 million toward universal pre-K for Pa. in his 2016 budget, but that will also need to be negotiated with the legislature.