Preserving the Past, Building the Present, and Envisioning the Future 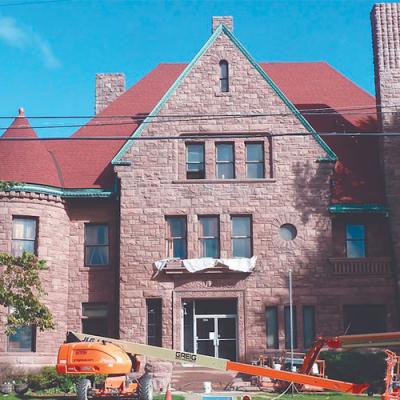 With a $3.5 million capital campaign successfully accomplished, and renovations and additions to the West Sixth Street complex nearly complete, the Historical Society of Erie County is now working to lay the foundation for more local architectural preservation, and wants to educate professionals about the benefits available to them for saving structures rather than tearing them down.

On July 20, the Society will co-host with Erie Insurance an invitation-only preservation summit for local bankers, attorneys, accountants, developers, architects, elected officials, appraisers, and key community stakeholders that will feature a presentation by Jake Schneider, a Buffalo-based developer and tax credit expert. His presentation will outline how to use the federal historic rehabilitation tax credit program. The summit was also made possible with support from The National Trust for Historic Preservation the National Trust Community Investment Corporation.

Caleb Pifer, Executive Director of the Historical Society of Erie County, says that the summit will focus on the federal tax credit program because use of it in the region has been limited. Pennsylvania also has a preservation tax credit program that can be used in conjunction with the federal credit as long as the project meets requirements. According to the website of the National Park Service which administers the program, "tax credits are available for any qualified project that the Secretary of the Interior designates as a certified rehabilitation of a certified historic structure."

Schneider's presentation will be followed by a tour of recent renovations to historical buildings in the city, including the Dickson Tavern at East Second and French streets, renovated by the architectural firm of Kidder-Wachter, as well as tours of the C.F. Adams Building at East Sixth and French streets, and the former National Guard Armory at East Sixth and Parade streets, both renovated by Erie Insurance.

The Society is dovetailing the summit with its annual meeting and awards reception later in the day. Tom Hagen, well known for his interest in historical preservation and local history, will deliver the keynote address at the meeting.  According to Pifer, "[Tom Hagen] has never really spoken publicly about historic preservation. So for many, this will be their first time to hear his thoughts on the subject."

Local history and preservation achievements will be highlighted as well. Eric and Gail Root, who restored the 1897 Schoolhouse at the corner of Rt. 5 and Dutch Road in Fairview and Brent and Mari Willey, who restored the Taylor House in Edinboro, will receive Preservation Awards for Adaptive Reuse; The Jefferson Educational Society will receive the Local History Award for its publication of the chronology of the two-year Perry 200 celebration; and John Baker will be honored as the Volunteer of the Year for his photo documentation of the restoration and construction of the new Hagen History Center on the campus of the Historical Society.

The meeting and awards reception is open to the public but reservations must be secured and tickets are $15 per person.

Pifer says the Society has been recognizing local history and preservation achievements since the 1980s. The awards highlight the most significant history or preservation projects in the past year. "It not only honors the people who have pursued these projects, but it makes the community aware of the great things going in preserving the heritage of our region."

The annual meeting will also highlight the Society's recent accomplishments including the building of the King-Mertens Archive Building at the Hagen History Center along with renovations to the carriage house that will become the visitor center, containing a library, reading room and gift shop, and the Watson-Curtze Mansion, which is being renovated. New exhibits are currently being installed in the mansion and the full project will be revealed at a grand opening gala on Aug. 29.

"I cannot be happier with how the new visitor center inside the carriage house is turning out, says Pifer. "I think that folks will find the Visitor Center's Historic Research Library to be absolutely stunning."

The tax-credit summit could be the start of an increased interest in protecting our history, although Pifer says it will "not be a silver bullet to spurring preservation efforts in our region." He does say, however, "we hope that by further educating the professionals that splice together tax credit deals, we will have advanced the understanding of the importance of the credit in making preservation projects possible due to cost savings."

And the newly refurbished History Center should spark interest in our heritage and, perhaps, stay the wrecking ball a bit more often around town.