A recent Washington Post report reveals how much influence on strategic decisions representatives of the defense industry had in Iraq and Afghanistan.

by Jay Stevens
View ProfileFacebookTwitterGoogle+RSS Feed
December 19, 2012 at 10:11 AM 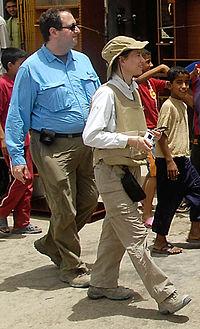 Lost in all the shuffle about the Sandy Hook Elementary shooting yesterday was a report from the Washington Post about the influence of Fred and Kimberly Kagan in David Petraeus' Afghanistan command. Fred Kagan works at the conservative American Enterprise Institute, and Kim Kagan runs the Institute for the Study of War -- which recently sent Paraag Shukla to give a talk at the Jefferson Educational Society. According to the WaPo's Chandraeskaran, the Kagans went to Afghanistan, were

...provided e-mail accounts and top-level security clearances in Kabul, they pored through classified intelligence reports, participated in senior-level strategy sessions and probed the assessments of field officers in order to advise Petraeus about how to fight the war differently.

The Kagans had "extreme" access to Petraeus, met with him often in private, and had a significant impact on Afghanistan strategy. All unknown to the White House and Pentagon, according to the report. When Stanley McChrystal had command of Afghanistan, the Kagans at first weren't given the access that Petraeus later would. The military "began to slow-roll their requests to visit Afghanistan."

In early 2010, they wrote an e-mail to McChrystal, copying Petraeus, that said they "were coming to the conclusion that the campaign was off track and that it was not going to be successful," Fred Kagan said.

To some senior staff members in McChrystal's headquarters, the e-mail read like a threat: Invite us to visit or we will publish a piece saying the war is lost.

Worried about the consequences of losing the Kagans, McChrystal authorized the trip, according to the staff members....

After their trip, which lasted about two weeks, the Kagans penned a piece for the Wall Street Journal. "Military progress is steadily improving dynamics on the ground," they wrote.

That was typical of the couple. As they were given access to military planning and intelligence and their strategies were adopted by military leaders -- especially Petraeus, who assumed command in Afghanistan in 2010 -- they would report back home through op-eds, speeches, and Congressional testimony how well the new strategies were working.

The Kagans didn't received a dime from the government or the military. But here's the kicker. They were still receiving salaries from their think tanks. And the think tanks are largely funded by defense contractors.

[Kim Kagan's] major backers appear to have been pleased that she cultivated such close ties with Petraeus, who went from Kabul to head the CIA before resigning this fall over his affair with Broadwell.

At the August 2011 dinner honoring Petraeus, Kagan thanked executives from two defense contractors who sit on her institute's corporate council, DynCorp International and CACI International. The event was sponsored by General Dynamics. All three firms have business interests in the Afghan war.

Kagan told the audience that their funding allowed her to assist Petraeus. "The ability to have a 15-month deployment essentially in the service of those who needed some help — and the ability to go at a moment's notice — that's something you all have sponsored," she said.

You have to remember that the Kagans are often seen as the architects of Petraeus' "surge" in Iraq. They were also strong advocates of increased military action in Afghanistan. As emptywheel points out in his post parsing the WaPo report, the Kagans would have had access to the President's attempts to begin peace negotiations to end the war, and they "dictated the surge in Afghanistan, too, advocating for the targeting of the Haqqani network at a time when President Obama was trying to reel in the war."

The suggestion is the Kagans drove the new focus on the Haqqanis–indeed, were even issuing orders to officers before Petraeus was doing–just at the time Obama was trying to de-escalate the war.

The implications of this story are quite sobering, though Chandrasekaran has just begun to map it all out. Paid representatives of the war industry twice intervened with David Petraeus to get him to extend and expand the war. And in the case of Afghanistan (and I suspect even in the case of Iraq) they did so by bypassing the entire chain of command.

Got that? Civilians funded by defense contractors -- the ones who have profited immensely from the wars in Iraq and Afghanistan -- used their influence and connections to influence war strategy, always to expand or escalate the war, and sometimes contrary to the goals and decisions of the President.

In short, it looks like the defense industry, working through the Kagans, had a heavy hand in Iraq and Afghanistan and influenced commanders to adopt policies that benefitted them, first and foremost, and possibly to the detriment of our national interest.