Prophets, Polygamy, and a Presidential Assassin 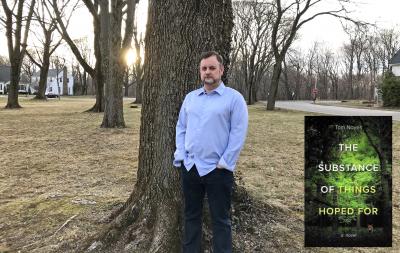 Local author Tom Noyes' The Substance of Things Hoped For doesn't lend itself to a tidy summary.

Although a work of fiction, it was inspired by the true story of the Oneida community — an "abolitionist, free-love religious commune from the 19th century" according to Noyes. The founder of this experiment in Christian socialism was John Humphrey Noyes, a central character in the book and a distant relative to its author. Oneida was founded on the principle that if people followed Noyes' theological instructions, then heaven could be present on earth. The slice of heaven he spoke of was in Upstate New York, roughly four hours east of Erie.

In 1860, Oneida welcomed its most infamous member, Charles Guiteau. Mentally ill and prone to both religious and political zealotry, Guiteau would go on to assassinate President James A. Garfield in 1881. According to Noyes, "the novel measures these two men against each other and the supernatural, prophetic visions that they had — how they saw God's plan for America in the 19th century in such different ways."

There's a lot to unpack in The Substance of Things Hoped For. To sort it all out, I chatted with Noyes (a friend and colleague of mine at Penn State Behrend) over Zoom in early April. Our conversation has been edited for length and clarity.

Dan Schank: Could you give our readers an overview of the Oneida community and its principles?

Tom Noyes: It was a commune in the sense that everyone was to share all labor and profits. What got everyone's attention was the notion of "complex marriage," as John Humphrey Noyes called it. In complex marriage, all the adult men could be married to all the adult women. It wasn't a one-to-one, wife and husband correspondence. Noyes saw the Biblical ideal of marriage as a group undertaking.

As the decades went by, Noyes started to dabble in eugenics a bit. He started to pair people in his community together to have children who he thought would make interesting offspring. Otherwise, a big part of his vision of marriage and sex was that it did not have to — and in most instances should not — produce offspring. He was a big proponent of male continence.

Part of this was also kind of progressive. He often talked about how women should not have to spend their whole lives bearing and taking care of children. That they were made for more; that they were intellectual beings just like men were. He gave women positions of leadership in the community that were extraordinary for this time. On the other hand, in his personal relationships he exploited women. And there's also some evidence and suspicion that he would put himself in position to participate in the sexual life of the commune in ways different than other men. In a privileged way.

DS: Tell us about the research process that went into the book.

TN: The main thing I did was to read John Humphrey Noyes' own writing. He was a very prolific author. He has some pretty interesting philosophical books, theological books, and political books. He even dabbled into anthropology a bit.

I also went to the special collections library at Syracuse University. You go in there and put the gloves on and you can read the letters — not just letters that Noyes wrote, but letters from detractors, fans, lovers, and ex-lovers. And I tried to capture some of those voices in the novel.

The notion that someone in the 19th century could envision upstate New York as a kind of heaven on Earth really intrigued me. Just the idea that, at least in someone's eyes, there was this geographical location that could be made into an ideal celestial home.

DS: Tell us about the play between fact and fiction. To what degree did you stay true to history? Where did you take liberties?

TN: It's definitely a novel.

Most of the characters who I have as my narrators are actual historical figures. And many of the events that occur in the novel are based on things that really happened. But other than that — including personalities, conversations, dynamics, and so on — I fully admit that I took great artistic license in reimagining those relationships and dynamics.

Trying to distinguish between authentic voices and voices that are out to exploit is interesting. The ways in which the wrong kinds of personalities can draw people in, and how public discourse can become poisoned. How something that starts off as idealism can become polluted and turn into its opposite. How Guiteau combined hardcore political beliefs and hardcore religious beliefs and how that recipe almost always, in history, is a recipe for disaster.

The Substance of Things Hoped For will be released at the end of April by Slant Books: slantbooks.com