Bills in the Pennsylvania House and Senate have potential to radically change threatened and endangered species classifications. 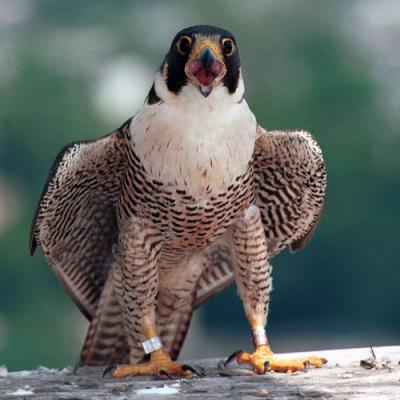 Currently making their way through the Pennsylvania General Assembly, proposed bills have the possibility to radically change the way an animal gets designated as "threatened" or "endangered" in Pennsylvania, and also change the review process, mandate the creation of a more-accessible database of threatened or endangered species, and stipulate changes to the permitting process conducted by the Department of Environmental Protection.

With House Bill 1576 and Senate Bill 1047, what's at stake is the welfare and future of vulnerable species and the preservation of quality wilderness within the state. While there are numerous complexities to these bills, two major changes are the most vital to understanding the bills' impact.

Some species are currently only state-listed, and the Pennsylvania Game Commission (PGC) or the Pennsylvania Fish and Boat Commission (PFBC) have the freedom to propose an animal for designation based solely on state conditions. For example, the peregrine falcon is considered threatened in Pennsylvania but is not under the Endangered Species Act (ESA).

State Rep. Curt Sonney R-54th Dist., a co-sponsor of the bill, says that this alignment with the ESA is intended for future species, not ones already on the Pennsylvania-only list. Others aren't so sure. "One of the issues with this bill from the beginning was its muddy language; this point is open to interpretation," says Scott Weidensaul, naturalist and author from Schuylkill County.

The bills also stipulate that any decision made by the PGC or the PFBC to place species on the endangered or threatened list — or designate a wild trout stream — must be reviewed by the Pennsylvania Independent Regulatory Review Commission (IRRC) created in 1982 to essentially protect the interests of small business.

The PGC and the PFBC are exempt from having their decisions reviewed by the IRRC. There is some disagreement as to why, but most people involved agree that it was to ensure that decisions like listing a threatened or endanger species is based on scientific findings and not politics.

Under the current proposals, IRRC will be required to review them with all of the criteria it is mandated to use, such as public health and welfare and economic impact, as well as the soundness of scientific data. Opponents say this politicizes the process and creates redundancy.

Paul Burroughs, Conservation Chair of Presque Isle Audubon, says this will take the decision away from scientists and give it to the political process. "It opens the door to cherry-picking species for listing or delisting," he says.

Rep. Sonney disagrees, saying that the bill will make decision making more transparent and streamline the permitting process. He says "With IRRC review, concerns will be brought to the surface so all parties are aware of them and know what the impact will be."

State Sen. Sean Wiley, D-49th Dist., points out, however, that the true impetus behind the bills may be understood by reading President Pro Tempore Joseph Scarnati's (R-25th Dist.) memorandum announcing his sponsorship of SB 1047, when Scarnati writes, "(this) legislation, will allow Pennsylvania to maintain a national standard of protection for our fish, wildlife, and plants without unduly harming our businesses and employers who provide family sustaining jobs in the Commonwealth."

The PA Game Commission (PGC) and the Pennsylvania Fish and Boat Commission are opposed to the bills, as are environmental, fishing, and sportspersons' groups across the state. Supporting the bill are primarily companies that are in the mining, building, and land development industries, and the coalitions that support them.

Both the PGC and the PFBC have independent review commissions of their own, says John Arway, Executive Director of the PFBC. "I truly don't understand the need for this legislation. We already have an open, transparent, and defensible regulatory process."

Sen. Sean Wiley, speaking of SB 1047, says he is not supportive of its efforts or those of HB 1576. because they attempt to further residential, commercial, and industrial development in the Commonwealth at the expense of wildlife habitats. "I am always a strong supporter of stimulating economic growth and development, but never at a cost of this magnitude," he says.

Both bills were identical when first introduced, but HB 1576 has now seen amendments and is slated for leaving committee to make its way to the house floor by March 10. SB1047, still in its original form, is in committee. Travis Lau, spokesperson for the PGC, says of HB1576, "the amendments address some issues, but there are still valid concerns."

As the process gets closer to full assembly debate, there are still many unanswered questions as to the true purpose and impact of these bills.

"Ironically," says Weidensaul, "if these bills pass, the result could be stricter federal oversight and regulations if U.S. Fish and Wildlife finds state protections lacking."