Psychostick // IV: Revenge of the Vengeance

Make no mistake about it – these guys rock first and foremost, especially on this album's standouts, the anthemic "Obey the Beard," as well as "Dogs Like Socks," which explores the complexities of canine/hosiery relations.

by Cory Vaillancourt
View ProfileFacebookTwitterGoogle+RSS Feed
October 29, 2014 at 6:55 AM 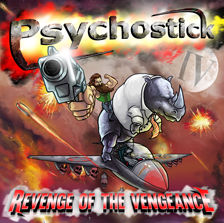 IV: Revenge of the Vengeance

I have to admit, when I received an email from Chicago-based foursome Psychostick's publicist, I didn't even know what "humorcore" was, much less that it is a genre of hardcore metal gilded with irreverent and somewhat humorous (duh) lyrics and themes. But yeah, it's a real thing. Still scratching your head? Think of bands like Anthrax and Suicidal Tendencies – both of whom have at times dipped their toes into those still waters ("I'm The Man" and "Institutionalized," respectively) without plunging headlong into knock-knock jokes. So make no mistake about it – these guys rock first and foremost, especially on this album's standouts, the anthemic "Obey the Beard," as well as "Dogs Like Socks," which explores the complexities of canine/hosiery relations. If you're still unclear on the concept, check them out at Basement Transmissions in Erie on Sunday, Nov. 9.

psychostickiv revenge of the vengeance