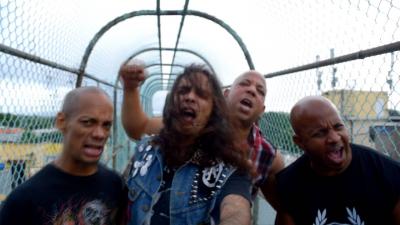 Puerto Rico's Vieja Estirpe fuse punk and thrash metal in the vein of '80s bands like English Dogs and Broken Bones. Hear them shred at Basement Transmissions on Oct. 5.

Vieja Estirpe hails from Puerto Rico and are making Erie the first stop on their tour of the mainland. The band's latest album, Planeta en Crisis, was released in 2018, but hits like something straight out of the mid-1980s hardcore punk/thrash metal crossover scene, in the vein of bands like English Dogs and Broken Bones. Fast-paced riffing and ripping guitar solos are aplenty throughout the album, and a bit of ska creeps into the track "Sin oro se vive, Sin agua te mueres," showing the band's diverse influences.

Opening bands are Erie locals Maniacal Device, Erie's own trio of Puerto Rican punks Mala Sangre, and Columbus, Ohio's Betty Machete and the Angry Cougars. Maniacal Device released two new songs earlier this year, "Love Skull" and "It Should Have Been Lars," and are currently recording more new material. With Betty Machete at the helm, the Angry Cougars released the three-song EP Stay in Your Lane in January. The band also recorded a vinyl-exclusive cover of the Stooges' "I Got A Right," limited to only 100 copies. — Tommy Shannon