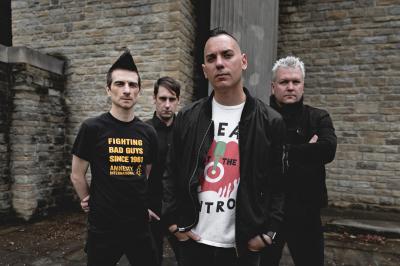 Josh Massie
Pittsburgh's Anti-Flag, currently consisting of Justin Sane (left), Chris Head, Chris #2 aka Chris Barker, and Pat Thetic, has firmly established its foothold in punk rock history. In an interview with our Nick Warren, Barker opens up on why the time was finally right for a new album.

Anti-Flag have been one of the world's biggest punk bands for decades now. The Pittsburgh-based quartet put out their debut album, Die For the Government in 1996, and are gearing up for their 12th studio album, 2020 Vision, to be released Jan. 17. When the band began, they were a trio fronted by Justin Sane (Justin Cathal Geever). In 1997 Chris Head joined the band on bass, quickly moving to rhythm guitar. Two years later, Chris Barker joined as their bass player and has been with the band ever since. Over the years, Barker's role has evolved, and he's become a sort of co-frontman, sharing lead vocals with Sane, morphing into the de facto mouthpiece of the band. As the band returns to Erie for the third time in 12 years, we talked to Barker leading up to their December show.

Nick Warren: As a Pittsburgh-based band, we kind of share the same environment and atmosphere, especially politically. What would be your personal take on the political climate of Western Pennsylvania in particular?

Chris Barker: Well, I certainly think that people in this portion of the country were politicized at very early ages, whether it's industry moving out in lieu of cheap labor, or just the impact that has on your family. When you look at people that are struggling and doing that work to make ends meet, it instills in you a value of work and a value in treating all people respectfully because you see rugs get pulled out from under people at a young age.

So empathy comes quickly to people from this part of the world. I think that sometimes that leads to a vulnerability, and it leads to people like Donald Trump preying upon that vulnerability and courting votes from people who have been struggling, pretending to be of a populist movement but being a further extrapolation of the status quo. So I think that there are a lot of similarities. When you're in Erie proper the same way when you're in Pittsburgh proper, you find a lot of like-minded people, you find a lot of people that want socioeconomic and racial equity and justice. And when you go 15 minutes outside of the city, it's easy to say "oh shit, there's a lot of people who look at this world a different way than I do."

NW: So, on the 19th, you'll be joined by a few bands, one obviously being The Code. Can you tell us a little bit about Anti-Flag's history with The Code in particular, and, your personal history too.

CB: So, it actually really starts with my personal history because when I joined Anti-Flag, I was in another band at the time, called Whatever It Takes. Anti-Flag — at the time I joined the band — was toiling in the DIY scene a lot in many other parts of the country. But in Pittsburgh and on the East Coast we had was an established following that had put us into clubs and put us on the tours with other bands. So when I joined, I was still in a DIY firehall-show-having band. And I met Marc [Clinger], and I met the rest of the guys in The Code. At the time, [that included] Seth [Reese] and Jay [Walker], who are still in the band, and Beau [Barber], who was just joining. And I really became great friends with them and brought them into the fold. We put out their first record on A-F records because I saw them as a band that I thought was not just going to break out of that community, but carry that community into that breakout — carry that ethic similar to what Anti-Flag could be doing ,which was just extrapolating on those ideas on any stage they were given and taking advantage of those opportunities and not taking them for granted.

So The Code was a perfect example of that type of band, and later we ended up poaching Marc from The Code. He's been our stage manager and main guitar tech since 2004. He's been on every tour we've done for the last 15 years, which is pretty incredible too.

It's also really funny because Marc introduced us to this really young kid. Jesse Jones since 2004 has been like the main liaison for all things day-to-day for Anti-Flag, and he's literally the most important member of what we're doing. And we found him when he was 17 or 18 years old just following Marc around. So Roger [Harvey] who we're getting to next, he's a great, great human. And so we met him when we took The Code on their first full U.S. tour in 2003. He was probably 15 years old; he had a letter from his mom saying that Marc was his legal guardian and allowed to take him across state lines. And I remember they showed it to me like one of the first shows and I was like, I don't think that this is legit [laughs]. I don't think you can just do that. But yeah, Roger has been in our lives since then, too. I was in a band with Roger for quite some time, White Wives.

So Marc's brought a lot of people into my world which is really funny and interesting to look back on. Even Zac [Lucas], who is doing the show, drives for us. And we've had artwork for the band done a couple of times, one record — The People or the Gun — the other record — For Blood and Empire — a lot of T shirt designs all done by Mike Ski, who was in Brother's Keeper, and The A.K.A's, and is now king of Philadelphia [laughs].

NW: Bass-wise, what drew you to the kind of style that you have, that kind of rounded, punchy, always-moving sound?

CB: I like to believe that I've gotten better at not overplaying [laughs] in my age ... I never thought about what the vocal was doing or what everybody else was doing. I only cared about what I was doing. But yeah, that just kind of comes from the music that I like. I love The Dead Kennedys, and Klaus [Flouride] is a fantastic bass player. I love Rancid, and obviously, Matt Freeman is the quintessential punk rock bassist. So, I was just trying to emulate the things that I thought were interesting. And then even moving into when I got older, in the late '90s, when I started listening to the Beatles, and when I started to listen to more soul music and finding how important it was to lift parts. And because you live in that low-end world, you can accentuate melody in a different way than guitars can or vocals can ... That's just been a thing we've been trying to do with Anti-Flag songwriting, in general, is be the best version of ourselves that we can. When you're a band for 20-plus years, the greatest gift you get is perspective.

NW: Leading up to the upcoming 2020 Vision album, what kind of messaging, or what kind of things are you trying to get behind, both musically and lyrically?

CB: Well, frankly, there's a conversation that happened that really hasn't happened before in our band's life and simply it's "do we need to make another record?" [laughs] Because we have enough songs and there are enough people that care about records we've made in the past that we can go out and we can tour and we can do anniversaries of things.

NW: The "play the whole record through" kind of shows that you see more and more of.

CB: Yeah, and things wouldn't change that much in our lives. But the end of the discussion was, there's no reason to make another Anti-Flag record unless it serves a purpose that the other ones don't, or is musically better or more interesting or fills a gap that wasn't there. So, with 2020 Vision, I think you find us doing that work, trying to be a part of what's happening now, but also being cognizant of the fact that art and music don't change things in a moment. So you don't work and write a song that is about social and economic injustices on a Tuesday, and then Wednesday, the world's different, it just doesn't happen right away. So we're slowly trying to influence the conversation. But with 2020 Vision in particular, we're trying to take a headcount of people who feel the same way that we do, who feel that LGBTQ+ rights are valuable, who feel that those that are in the most marginalized communities, gay, lesbian, transgender, women, people of color, Muslim communities, refugees, immigrants, these people that are being scapegoated by a current administration that's preying upon fear and on the worst parts of our humanity and using these people as political pawns versus using their power and their wealth to lift all boats. If you feel that we're on a path of fascism and bigotry and you want to get off that path, raise your hand.

Nick Warren bought his copy of Die For the Government at Boro Tunes in 1996, and grew up singing those songs. He can be reached at nick@eriereader.com