Punk Rock Mash About to Arrive at Scotty's 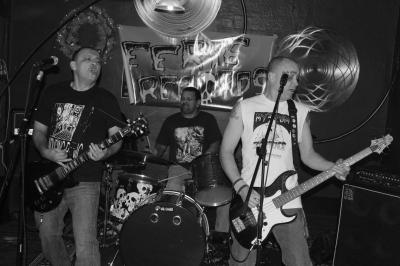 With three of Erie's heavy hitters and an import from Cleveland, Scotty's Martini Lounge is bound to be overflowing with energy. The Coffin Bangers, Revelation, and Mala Sangre will be joined by Black Static eye for an evening of hard, fast rock and roll.

Returning from the grave for their first show of the year, The Coffin Bangers are fronted by Erie's own Bob Kellogg. While he's been spending his time with The Gabba Ghoulies as of late, Kellogg is known to many from his days as the frontman of My 3 Scum.

Lead by seven-string bass player Frank Ferko and guitarist/trombone player Brian Gray, Revelation tends to color outside the lines when it comes to musical genres, and always proves to be an exciting act. Cleveland's Black Static Eye have a buzzsaw sound of groovy chaos, for what's sure to be a set to catch. Punk trio Mala Sangre will sound off as they always do, filling the back room of Scotty's with their raw, powerful punk rock sound. — Nick Warren