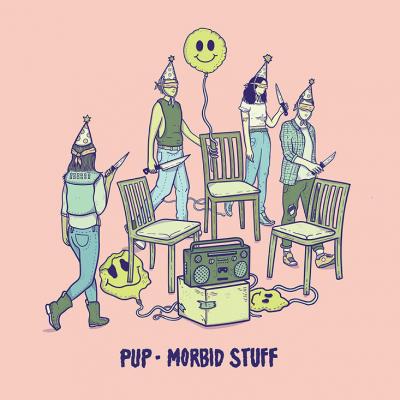 There's always something so wonderfully refreshing when a new punk rock record comes out and it's as satisfying as Morbid Stuff. It doesn't happen often, and when it does, it's rightfully a cause to rejoice (sidenote: if your definition of punk is so mind-numbingly narrow as to be more gatekeeping than inclusive, then congratulations! You're not punk rock anymore! You can keep listening to classic rock and other vapid trash). This is the third full-length album from the Toronto, Ontario trio, and while their 2013 self-titled record brought them the attention they deserved, this album cements their catalog with a wonderful high mark of consistency. If you like anthemic, uptempo singalongs, this is the album for you. If The Hotelier is a bit too whiny, or the Menzingers are too dad-rock for you, then perhaps PUP is just what you need. Morbid Stuff is an album built from depression, but it doesn't sound like it — and that concealing trick is one of its most successful traits, an oxymoronically energetic suite filled with ennui. — Nick Warren