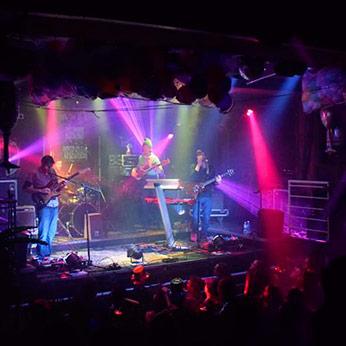 Purple Jam is a tribute to local musician Kurt Sahlmann, who passed away suddenly in 2015. Sahlmann fronted the group Kurt's Purples.

Growing out of the "Barrage Band" shows helmed by Martin Wolper, Purple Jam mashes together an eclectic collective of Erie musicians ready to create something new, no matter how ephemeral. More than that, the show is a tribute to local musician Kurt Sahlmann, who passed away suddenly in 2015. Sahlmann fronted the group Kurt's Purples, whose musical mythology held that the color in question served as a kind of creative conduit. Holquist explained the conception, noting that "I had been a part of some of the Barrage shows, which was an experience that I really loved and one that I'd been thinking was due for a comeback. And apparently, shortly before he passed away, Kurt had been having similar conversations with [music promoter] Ryan Bartosek, about wanting to see this idea come back. So, we thought, what better tribute?"

Each band is given time to practice and write original songs. Band members vary from professional sidemen and music educators to relative newcomers. There are poets, punks, shredders, and singer-songwriters all making music together.

Holquist detailed how the event holds meaning for many involved, saying that "Kurt was a friend, and a big supporter of what I do, along with so many others in Erie. He spent years and years hosting jams and open mics and trying to foster collaboration, so it's the kind of event that we think he would've really gotten behind and been happy about." – Nick Warren