From Drips & Beats, to addiction, to "Ms. New Booty," the Georgia-based rapper dishes.

by Alex Bieler
View ProfileFacebookTwitterInstagramGoogle+RSS Feed
September 18, 2013 at 7:34 AM 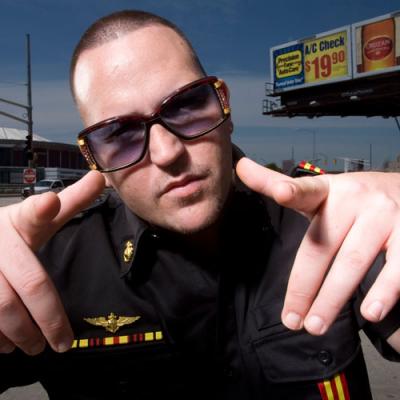 For over a year now, Drips & Beats has been providing the community with an outlet for socially-conscious hip-hop, with The Box Street Couture bringing in big acts like Nappy Roots and providing a spotlight for local up-and-comers like C. Brown and Profound Produce every month. Sadly, all good things must come to an end, with the event dripping its last drop Thursday, Sept. 19 at the crooked i. Still, despite the end of Drips & Beats, we have one last opportunity to celebrate the hip-hop scene instead of actively sitting out and letting good things go down the drain.

Appropriately, the final Drips & Beats lineup is loaded with Bubba Sparxxx leading the way. While Sparxxx is often associated with the club hit "Ms. New Booty," the Georgian rapper first made waves when he dropped "Deliverance," an album that bridged the gap between country and rap 10 years ago. After dealing with personal demons and label issues, Sparxx is ready to release "Pain Management," his first album in seven years, and promote the hip-hop life in the final Drips & Beats.

Alex Bieler: Tell me about what it was like making your new album.

Bubba Sparxxx: It's the first album I've put out in seven years for a lot of different reasons. I've had some pretty well-documented – I'm not secretive about it – struggles with addiction. The song "Splinter," which was one of the first songs and that we leaked, and the video details that – it's basically just death and rebirth; the old person has to die so the new person can be born. Really, I just stopped doing drugs.

For any Bubba Sparxxx historian, if I had to compare ["Pain Management"] to an album of mine, it would be "Deliverance." The song "Ms. New Booty" is probably in a pop-culture sense what I'm most known for, but I'd say the reason I have fans, the reason I can still go around and tour 100 to 130 shows every year is "Deliverance." I felt like it was sensible where I'm at in my personal life now, being more mature and living a more substance-filled life, it was time to do that kind of music. It's country, southern rock, and hip-hop, I'd say.

AB: Speaking of "Deliverance," Sept. 16 was the 10th Anniversary of that album.

AB: Do you view it differently now that it's been a decade since that album came out?

BS: Not really. As time goes on, it's neat because people discover that album every day. They'll hit me up on Twitter – "Wow, my friend put me on to this album, it's incredible. It can't be the same Bubba Sparxxx that put out 'Ms. New Booty.'" It's truly timeless music, where a song like "Ms. New Booty" feels like what was going on in the mid-2000s, the "Baby Got Back" of the 2000s, if you will. "Deliverance" is really just a new genre of music. Me, Timbaland, and the other producers on that album, Organized Noize, were trying to pull off rap and country in a way that wasn't corny. Having grown up in the rural south, I knew that the people in the quote-unquote "hood" and the people in the country area that are poor are not all that different. There was just this one big imaginary wall placed in between these people that made them think they're so different. As far as a general mindset, they're really not that different, so I thought it could work, and to a degree it was my calling.

AB: You're closing out the Drips & Beats series. Do you have any thoughts about that?

BS: Anytime I have an opportunity to be a participant in hip-hop culture being on display, it's always a huge honor. At the end of the day, I'm a white dude from the country, but I'm hip-hop first, because I believe that this culture is breaking down more barriers in this world than anything, other than religion, and it's brought people from different walks of life together. I'm kind of sad that this is going to be the last time they're doing it.

AB: I have to ask, what made you decide to put three "x's" at the end up Sparxxx.

BS: Honestly, I could make up some bullshit about why, but I really just thought it looked cool. [Laughs] What's crazy is that the most common misspelling of Sparxxx is with two "x's." Where are the mathematics in that? It's so frustrating, I'd much rather have somebody spell it S-p-a-r-k-s than put two "x's," because that shows you went the distance and did the work necessary to be right and you stopped just short. Now it's like you're just trying to insult me. If someone spelled it "Sparks," then they just don't give a shit, where as with two "x's," you do, you just messed it up.

AB: It's like you fumbled at the one-yard line.

Sparxxx's new album comes out Oct. 15, 2013. Make sure to check out his new tracks, as well as Crystal Seth, The Romantic Era, Mad World, Profound Produce, DJ Salt, DJ TZ, and Juicebox at Drips & Beats at 8 p.m. Thursday, Sept. 19 at the crooked i.