Q&A with The Pride of Erie PA

by Matt Flowers
View ProfileFacebookTwitterGoogle+RSS Feed
July 24, 2013 at 7:06 AM 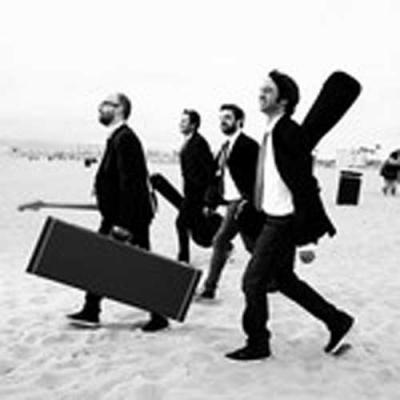 I'm staring at a row of acoustic guitars in my room, waiting until the writer's block resides – daydreaming of a tour that will someday lead my band, Falling Hollywood, out West - when I receive a message from Contributing Editor Cory Vaillancourt about a pop-rock band from Hollywood called "The Pride of Erie PA."

My first thought – what the hell is with their name?

My second thought – how is Erie, Pa. on anybody's radar?  Train frontman Patrick Monahan is from Erie; a couple miles away Trent Reznor grew up in Mercer, Pa. but then I found it – the Peppermint Lounge house band, The Fabulous Epics (later known as Orange Colored Sky) who inspired the 1996 film "That Thing You Do."

My third thought – let's interview The Pride of Erie PA and find out their story.

After all, it only seems natural for two bands from polar opposite ends of the country, sharing each other's respective geographic location in their names, to get to know one another, right?

Matthew Flowers: Your band's name is The Pride of Erie PA. Where and how did you come up with that?

Bill McShane: Basically there is the movie called "That Thing You Do" that came out a while back that is set in the '60s. It's about this young high-school rock 'n' roll band that ends up having a hit song and becomes a No. 1 band. The band is called "The Wonders," and they are from Erie, Pa. There are a couple parts in the movie where they're like, "Back off, man; I'm from the Erie, Pa.…" I kind of like that idea, kind of like the Beatles – they came from Liverpool, and they made Liverpool famous. So this band in the movie kind of makes Erie, Pa. famous.

The reason we picked that, referenced it, and came up with the name is really just as simple as we were trying to come up with a name and at one point I was like, 'if there is anything we can think of that would be a reference to "That Thing you Do" that would be really cool,' because I love that movie and I love that vibe and it really fits my feeling about what we are trying to do with the band and so then that name just kind of popped into my head.

"The Pride of Erie PA" I thought sounded funny because obviously we're not from Erie, Pa., and it's just kind of an inside thing, you know? If you've seen the movie you would probably put two and two together that that's what we're doing.

I like weird band names like that, that sound like it's a sentence. You'd think there would be something coming later but nope, that's the whole band name.

The funny thing is you just name your band, you don't think twice about it really. Then a lot of kids online are like, 'You guys aren't even from Erie, Pa. How can you say that you're the pride of Erie, Pa.?" and we're just sort of laughing. It's just a band name!

MF: What kind of comments are you getting from Erieites?

BM: A lot of people get what the name is… The people from Erie – most of them – are like, 'That's awesome; we're from Erie.' But then there have been a couple people that are like, 'What?! You haven't even been here, how can you call yourself "The Pride of Erie PA?'"

Most of them think it's cool.

MF: Have you ever been to Erie?

BM: I've been to Pittsburgh. That's the closest city to it right?

MF: It's one of the closest "big" cities.

BM: I feel like I have been there because I used to be in a band that toured the whole country. We didn't play there, but I feel like we were there before.

MF: What band were you playing in?

BM: I was in a band called "Ultimate Fakebook." Pretty much all the guys in the band are from other bands. [Drummer Tony Thaxton was swinging sticks for Motion City Soundtrack. Guitarist Patrick Carrie played in Limbeck, once signed to Dog House Records. Funny man on bass, Mike Phirman is part of the television show "The Nerdist" on BBC America, and works with Chris Hardwick on the comedy music project Hard n' Phirm.]

MF: Is the content of your songs serious or comedic?

BM: It's kind of just sounds about girls, you know. [Laughs] Like typical pop songs. People that like bands like Weezer or Fountains of Wayne or The Beatles and Ramones kind of flavor I think would dig it. It's just kind of like short songs, sing-a-long melodies.

MF: Are The Beatles, Ramones, Weezer, and Fountains of Wayne the bands who inspired you?

BM: Yeah… and I was coming from loving '80s music and also heavy metal [laughs] when I was a kid – that's how it started. But I liked pop bands. One of the bands I really got into that inspired me was a band called Guided by Voices. They're probably my favorite band of all time.

MF: I'd say all you guys are seasoned musicians. But your EP's name is "Let's Start a Band." It connotes a group of greener musicians and lends itself to the idea of inexperience. How does this work with your song writing and your sound?

BM: The reason I like the title "Let's Start a Band" is it's just kind of reflective of our philosophy, which is we're doing this for fun. A band, to me, is something you do with your friends, first and foremost.

It's just like, "Hey, let's start a band." It's not about anything else except for that desire to make music and have fun making music. And that's kind of back to the band name referencing "That Thing You Do" – the great part of that movie is just how innocent and new that band is and it just so happens they get big.

Everybody that I know starts playing music because it's fun. So that [album name] is just to give the vibe that we're going for, it's very lighthearted. We all love pop music – great sing-a-long type songs and shit. It give you that feeling that I kind of miss, it's just about bands, opposed to a scene, or trying to be huge. It's about having fun in a band.

MF: How long have you guys been playing together?

BM: We've never played a show, actually. It started as a side project. We wanted to get together and just make some music.

We want to play some shows but everybody has other stuff they do so this is just kind of a side thing. We're not planning on touring or anything. We're probably gonna play in LA.

MF: What are the chances of you guys coming to Erie, Pa. and playing a show?

BM: I'd say the chances are pretty slim at the moment just because we don't have any kind of touring plans. But I will say if we ever do a tour that is outside of California, we will absolutely play Erie, Pa. [Laughs] We have to.

MF: I'm in a band called Falling Hollywood and I'm from Erie, Pa., and you're in a band from Hollywood called The Pride of Erie PA.

BM: That is kind of funny – it's perfect.

MF: Seeing as you've never been to Erie, Pa. what do you think this city looks like?

BM: Really, I just sort of think about the movie. It's not a super small town but it's not a well-known mega-city by any means, so I kind of imagine it as a mid-size city, like Pittsburgh.

MF: Did you know we have a beach here in Erie?

BM: I didn't really realize that until some people started commenting on our video because some people thought we had filmed it at the beach in Erie and then they realized it was Malibu. [Laughs]