Beards, tunes, and the Whole Foods Co-Op - see what Maps & Atlases has to say about these fascinating subjects. 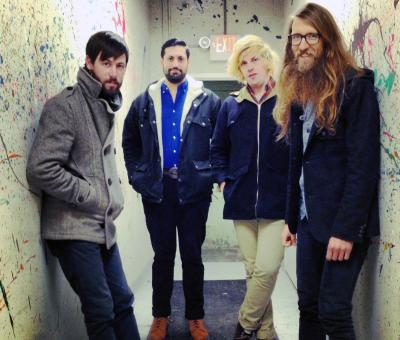 On Saturday, Jan. 26, Managing Editor Ben Speggen and I ventured out to Akron, Ohio with a couple of close acquaintances. Now, you may be asking, "Why, Alex? What would be the reason behind driving two hours southwest of Erie?" Well, faithful Readerites, we were there to check out Chicago-based indie rockers Maps & Atlases, whose last album, "Beware and Be Grateful," earned a 4.5/5 from this fine publication last year.

After meeting at Columbia College, Dave Davison, Shiraz Dada, Erin Elders, and Chris Hainey formed the band, playing their way into hearts and minds of fans with their quickly-plucked, math-rock-tinged sound ever since. We got a chance to sit down with Davison and the band before their show at Musica and discussed everything from the beards to the band's connection to Erie. Enjoy.

Alex Bieler: First off, how are you doing?

Dave Davison: Off the record, pretty good. [Laughs] We're having fun. We've got about a week's worth of shows that we're doing, and then in two weeks, we're going to Europe for a month.

AB: I think the first time I heard Maps & Atlases was from A.V. Undercover a few years ago. How have things changed for you guys since then?

DD: I don't know. I think that we've always been kind of gradually building upon what we started off doing and kind of just doing our thing, so we've just kind of stuck to making music for fun and being artistic and expressive. I think that we've progressed; hopefully we've grown in various ways.

DD: We all went to school together at Columbia College in Chicago, so that's where we all met and where the band started.

AB: So when you tour around the States, everyone gets their turn to be home?

DD: We're all kind of Midwestern for the most part. We all have family all over the place, so that's a really cool aspect of being a musician, because sometimes people will move away from Chicago, or you have family members you wouldn't ordinarily see that often – we are all constantly making rounds across the country, so we're always seeing people.

AB: So do you guys come through Erie?

DD: Yeah, we always stop in Erie; we love it. We go to the Whole Foods Co-op every time. That place is so awesome I wish we could have stopped there today. It would be fun to do an Erie show; that would be cool.

AB: We would love to have you. Now, this is probably going to be one of the more serious questions I ask, but does anyone in the band ever get beard envy?

DD: [Laughs] I don't think so; they got their own thing going.

AB: Well, I see three [members of the band] have got something going on.

Chris Hainey: I just shaved last night. There wasn't much going on anyway; I can't really grow one.

DD: I shaved my beard off a long time ago; this is a little thing.

AB: Yeah, you used to have it go down really far.

DD: I just put this on before we go on stage usually. [Laughs]

AB: Your beard is like, what, half your overall weight?

DD: Well, the beard is pretty light. It's like a wicker basket.

AB: Are you guys working on anything new or are you just touring?

DD: You know, we always try to stay busy and open-minded toward doing new stuff, but at the same time, we don't have any particular plans or deadlines or anything. Once we're in a situation where things are naturally coming together and we're coming toward something new, then we'll start focusing on that. When you first start playing an album, you have the album in mind and you want to do the best you can to represent the recording. As time goes on, you get more comfortable with it, but you also start building on it and all of the songs start finding a new groove live. That's a really fun part of a song or an album, and I think that we're getting to that part right now.

AB: So when you come together and create songs, does it just kind of flow out of you or do you have a very specific plan?

DD: It's different every time. I think this album was the first time that we deliberately made space for improvisation in the recording process, which was fun and new. There are definitely times in which there's a really specific goal that takes lots of working toward to make it be exactly right. Then there are times where it's like 'This bass is going to be something,' where we don't know what it is and we'll just let it be what it is. The unexpected things can be the most fun additions to a song, like when one thing will happen that you wouldn't necessarily think could be the main cornerstone of some track and then it's really featured. You can have a musical vision for things, but sometimes some cool sound will happen and it can be hard to plan that out.

AB: So what comes next after this?

DD: We're definitely going to continue to tour. We'll probably do a good amount of touring this spring and take things as they come and keep doing what seems fun. We'll see what happens.

Alex Bieler has beard envy but rocked out at the concert and is happy to have been in the presence of such a bearded rocker. To discuss all things beard, music, and more, you can contact him at aBieler@ErieReader.com and follow him on Twitter at @Catch20Q.