Queens of the Stone Age //Villains

Villains may be a bit slicker, but there's still plenty of grease and grime beneath that polish. 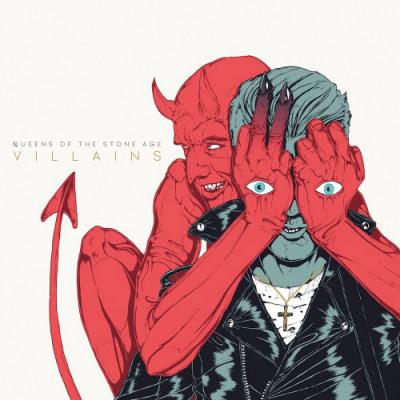 Queens of the Stone Age

For those who were raised on the drop-tuned, riff-laden stoner metal of Rated R and Songs for the Deaf, the notion of Queens of the Stone Age as a dance band may appall you. Prepare to be aghast, headbangers, because that is exactly what they've become on Villains. Crucify them as you might for the stylistic shift, but Villains is still undeniably Queens of the Stone Age in attitude, a credit to mega-producer Mark Ronson (whose clients have included Bruno Mars, Lady Gaga, and Amy Winehouse, among others). Although synthesizers play a larger role than ever (after being used as an accent on the 2013 masterpiece … Like Clockwork), don't expect the bright, shiny tones of EDM or Eurotrance here. Villains sounds as if Queens of the Stone Age stumbled upon equipment Gary Numan or Devo abandoned to the sands of time, promptly hauled back to their desert outpost to be restored and repurposed. Even the "dancier" tunes are suffused with the cool menace that has long been mastermind Josh Homme's trademark (the aptly funky opener "Feet Don't Fail Me," the scuzzy ballroom swing of "The Way You Used To Do"). Sure, Villains may be a bit slicker than Queens of the Stone Age fans are used to, but there's still plenty of grease and grime beneath that polish. — Matt Swanseger

queens of the stone agevillainsmatadormark ronson