Quotes, Thoughts, Musings, and More: Is What It Is Web-Exclusive

Like a fresh snowball to the face from your buds, this is exactly what you need right now. Read more of the thoughts of Stix, Steve, and Ian. 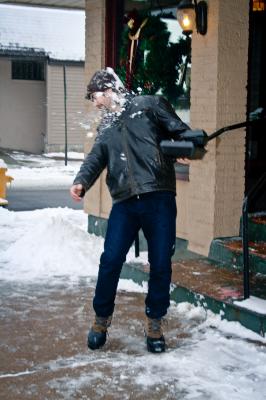 "I would say that the culture in Erie goes through periods, but I also think that we need to focus a little more or what's coming up, as opposed to maybe what's already there. Ian had mentioned this before; we were sitting up in the studio, and right below is Basement Transmissions, and, all of a sudden, there's these young kids coming through, and you don't know who they are, and some of them are maybe 17, 18 years old, the same age I was when I was playing professionally. And they're kick-ass! The ideas, the sounds, the energy that they're bringing is terrific. So I think we could focus a little more on that, and try to nurture it more, as older musicians."

"I'd like to see a little more of a cultural center in Erie. I'd like to see a place that is for everybody. I'd like to see clinics done. I think the city's big enough to support it. I'd like to see people in the right positions to get that stuff done, and get it out to the public. I have shown up to places where there have been artists in residency here, artists that are changing music…and they're here for a week from Chicago or New York or England, and I've shown up to their workshops, and, there's four people there. And I tell people about it, and it's like, 'Well, I didn't know; I had no idea that was going on.' So, I guess what I'd like to see is better communication, a little more work towards the education of music, and I don't just mean that in theory, but in educating people that this is a city that's big enough to support this, with enough artists and enough people. So I guess that's how I see the culture – it's a good culture with enough talent, but it has the potential to be great."

Where'd He Get That Thang?

"I grew up playing drums. I started at the age of 4, but I didn't jump on a set until age 6, at church –  Apostolic Faith Church of God. I played there for numerous years. I evolved playing gospel music all my life. That's my roots. I played with the greater Erie Community Gospel Choir when I was 13 to 16; I travelled all over the country with them."

"I just started playing. It's a God-given gift; I've been to a couple clinics and things like that, but no full, extensive training, never took lessons or anything like that."

Cheating on His Woman (with music)

"I love it. Music is my first love; that's my first girlfriend. Anybody ever asks, 'Who's the first girl you ever kissed?' I'd probably say 'Music.' I always cheat on whatever girl I'm with, with music. Music is my 'Plan A' ultimately."

Austrian-British logical philosopher, University of Cambridge professor, and author of "Philosophical Investigations" which some consider the most important philosophical tract of the 20th century. Some quotations attributed to him:

"A man will be imprisoned in a room with a door that's unlocked and opens inwards; as long as it does not occur to him to pull rather than push."

"I sit astride life like a bad rider on a horse. I only owe it to the horse's good nature that I am not thrown off at this very moment."

"Death is not an event in life: we do not live to experience death. If we take eternity to mean not infinite temporal duration but timelessness, then eternal life belongs to those who live in the present."

Well-known postmodern existential German Philosopher. Some Quotations attributed to him:

"And if you gaze for long into an abyss, the abyss gazes also into you."

"Convictions are more dangerous foes of truth than lies."

Greek god of grape harvesters, winemakers, and of ritual madness  - tied to the concept of ecstasy rather than insanity. Also known as Bacchus by the Romans, "…he is also the Liberator (Eleutherios), whose wine, music and ecstatic dance frees his followers from self-conscious fear and care, and subverts the oppressive restraints of the powerful. Those who partake in his mysteries are possessed and empowered by the god himself. His cult is also a 'cult of the souls;' his maenads feed the dead through blood-offerings, and he acts as a divine communicant between the living and the dead," according to Wikipedia.