New American Poet Ali Nuri on the experiences that shaped him 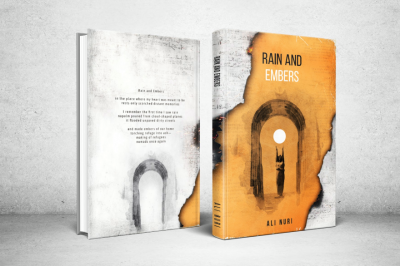 Poet Ali Nuri fled Iraq at the age of three after his family faced persecution under the oppressive Sadaam Hussein regime. Written in narrative free verse, the collection *Rain and Embers deals with themes ranging from to displacement and discrimination to love and redemption.

Ali Nuri was seven years old when he arrived in Erie. His journey from Diwaniya, Iraq, where he was born in 1987, was anything but simple and far from idyllic.

While living in Diwaniya, his family faced persecution from Saddam Hussein's regime and were forced to flee when Ali was only three. He and his family, along with tens of thousands of others, then spent the next four years awaiting asylum in an overcrowded, unsanitary, and under-equipped refugee camp in the extreme heat of Saudi Arabia.

Nuri remembers vividly the yellow shirt he always wore. His feet were bare. There was food, although not much, and they were unable to bathe. There was also the additional fear of living in the camps themselves.

"[T]he predominantly Shiite refugees are treated with some hostility in Saudi Arabia," the New York Times reported, noting instances of abuse, indoctrination, and violence in the camps. In more than one instance, guards opened fire and killed Iraqi refugees.

"The situation of these refugees is deplorable," Mamoun Fandy wrote of the camps in 1991. "They are heavily guarded by Saudi military personnel and not allowed to go out of the camps or have any contact with the outside world. They are de facto prisoners."

After four years of living in these conditions, Nuri's family received their approval for asylum in the United States. The family moved around between Michigan, Indiana, and Pennsylvania — but Erie would soon become his home.

Growing up in Erie as a young New American had its difficulties. Nuri struggled with the challenges of bilingualism and dyslexia, but soon found a way to work through both: writing poetry.

"[Poetry is] often a fragmented art form, much like the fragmentation of my memories," Nuri explains when I ask him why he was drawn to poetry. "Looking back, I find myself meditating on certain images rather than the complete picture of the traumatic experiences I had as a child: a blue gate, a red knife, a white shroud, the yellow desolation of living in the desert, the green landscape when I first set eyes on America — all of these images become more pronounced through poetry."

There was also a vulnerability and rawness to poetry which resonated with him.

"The pain I feel is still raw, looking back," he says, then adds that poetry also likely came naturally due to his own cultural upbringing. "Going back to my roots, the Qur'an reads more like poetic verse. Islam itself, at its core, offers a poetic and philosophical view of the world."

In early August, he published his first collection of these poems titled *Rain and Embers. It is 190 pages of deeply personal and captivating poems, each examining his own struggles and triumphs while providing a distinct glimpse into the New American experience. Written in narrative free verse, they deal with a wide range of themes including migration, trauma, coping, abuse, religion, discrimination, racism, philosophy, intimacy, love, loss, forgiveness, and redemption.

Nuri is publishing his collection during highly contentious political times in the United States, of course, and our conversation shifted to the current administration slashing yearly refugee quotas by over half. Some reports have expressed the administration's desire to decrease the quota to zero. Despite the rhetoric and policy changes, Nuri remains hopeful.

"This country did welcome me when I was stateless, which I will always be grateful for," he says. "Without the U.S., I might not have even survived to tell my story."

He highlights the many Americans who value diversity and fight for human rights, as well as the love and support he has received from so many along the way. At the same time, he also isn't naïve to the hateful rhetoric.

"It's a strange and confusing time to be in this country," he says. "I wish they knew how hard refugees and New Americans work when they come here. They enrich American society. My family had nothing to our names when we were dropped into the middle of the Rust Belt."

He notes how his father and uncles all worked from sunrise to *well after sundown, often sleeping on the floors of their shop so they could wake up and do it all over again.

"They built their business [Al's Auto at 2502 Parade St.] from the ground up and now it's one of the pillars of their community," adds Nuri. "And that isn't an atypical New American story either."

As for himself, after graduating from East High School, Nuri attended Edinboro University. He now resides in Las Vegas, Nevada where he currently works as a software engineer for a technology company focused on self-driving cars. One day though, he hopes to move back to Erie to be closer to family.

"Right now, I'm focused on my career growth, but the dream is to move back to Pennsylvania someday. Erie was the place that taught me what it means to be an American," Nuri says. "My foundation, my roots, and my idea of America is still there."

In the meantime, he plans to keep on writing poetry.

Ali Nuri's book, Rain and Embers, can currently be purchased as an e-book or in print on Amazon or at www.ali-nuri.com.