The video from the Harvard Food Law Society debate on raw milk...

by Jay Stevens
View ProfileFacebookTwitterGoogle+RSS Feed
May 22, 2012 at 11:57 AM 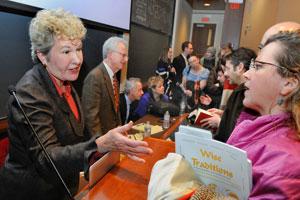 In this week's cover story on raw milk, I referred to a debate between raw milk advocates and opponents hosted by the Harvard Food Law Society. Fortunately for us, it's online.

I say "fortunately," because it's rare for the two sides on the raw milk issue to actually meet face-to-face and debate. In this case, it's not the fault of those touting the health benefits of raw milk -- it's the food and public health officials and regulators who usually refuse to engage.

That's not altogether surprising. For one, I suspect those in the public health sector feel like pasteurization is a "settled" issue -- the evidence that pasteurized milk is safer than raw milk is overwhelming and absolutely not in dispute. It's what comes after that gets fuzzy: the level of risk and the health benefits of drinking raw milk. Read the cover for more detail -- but basically the food science community is absolutely disinterested in studying possible health effects. They likely neither want to encourage more people to consume raw milk, nor want to back off their testing and regulatory methodology, which was engineered for food produced in assembly-line fashion.

Which is fortunate for raw milk advocates. Watch the video. Minnesota health regulator Heidi Kassenborg and trial lawyer Fred Pritzker really stick it to Weston A Price Foundation VP Sally Fallon Morell and author David Gumpert. Fallon Morell and Gumpert show a real lack of sophistication and knowledge about science and scientific methodology, while Kassenborg and Pritzker -- albeit expressing them not a little condescendingly -- obviously know their facts. You get the feeling that the more debates like this, the fewer people would drink raw milk.