by Tracy Geibel
View ProfileFacebookTwitterRSS Feed
July 6, 2016 at 9:45 AM 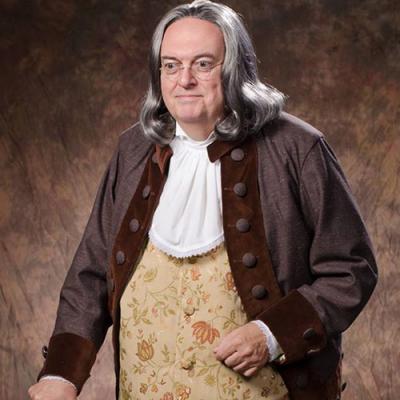 Ray Flynt, 70, has participated in more than 65 theatrical productions.

Perhaps the perfect man to play Ben Franklin, this cheerful and lively actor portrayed America's beloved founding father three times in 1776, the musical, before writing and performing in his own one-man play, Ben Franklin: An Ingenious Life.

From July 6 to 10, Flynt will assume that role again. Shows begin each evening at 8 p.m. in the Performing Artists Collective Alliance (PACA) Theatre, where he first performed the play in May 2014.

Flynt welcomes the audience into Franklin's living room and tells them a series of charming, entertaining stories that reflect Franklin's unique personality.

When the curtains open, Flynt welcomes the audience into Franklin's living room and tells them a series of charming, entertaining stories that reflect Franklin's unique personality. About 95 percent of the play consists of Franklin's own rhetoric, but an Erie Times-News review assures that the wording isn't difficult to understand.

Within two acts, there is something to appeal to everyone in the audience.

"If you don't like what you're listening to right now. Just wait a minute and a half," Flynt jokes.

While the setting is Franklin's Philadelphia home, his stories take the audience to New York, Boston and even across the Atlantic to London and Paris.

Originally from Pennsylvania, Flynt now resides in Florida. He is the author of several books, including a mystery series about Brad Frame, a private detective. He began writing because he took a job that required him to travel; he wasn't able to perform as often, so writing served as a "creative outlet." He is currently working on Embalmed, the sixth book in the Brad Frame series.

Following the show, Flynt returns to the stage as himself, where he holds a conversation with the audience. He hopes to receive feedback regarding the performance and enjoys sharing additional anecdotes that he couldn't include in the play. – Tracy Geibel