Stories you may have missed from the Erie Reader Archive. This week: Is the "runway to somewhere, we hope," really a "bridge to nowhere?" 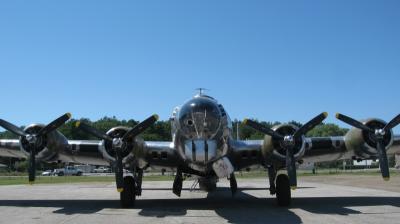 In our current issue - now on newsstands across the area - former Erie Mayor Rick Filippi's column "Exile on State Street" targets familiar ground - the "runway to somewhere, we hope."

He is, of course, referring to the $90 million runway extension project at . In his piece, he comes to the conclusion that "...the City contributed assets to the runway project valued at approximately $51 million and got $2 million in return for a net loss of $49 million!"

As Filippi widens his scope, he goes on to lament - perhaps rightfully so - that Erie seems to have gotten the short end of the stick, and that the "fundamental problem with our region's economic development strategy is that we really don't have one, at least one that is collaborative and considers regional development and local impact together."

Almost exactly one year ago, Erie Reader Editor-at-Large Cory Vaillancourt saw the runway extension project from a different perspective - the nose turret of a WWII-era B-17 bomber called the "Yankee Lady," who, along with her crew, was in town as part of the "Wings over Wheels: Celebrating Erie's Runway to the Future" event at the airport.

As the 68-year-old, 56,000-pound, 5,000 horsepower aircraft approached 200 miles per hour and lifted off from that "runway to somewhere," Vaillancourt both filmed and described the experience; however, as they gently loosed the bonds of Earth and approached 3,000 feet above ground level, he became more contemplative and philosophical, because he does that sometimes. Or, it was the open cabin and lower oxygen level at altitude.

Either way, Vaillancourt came to a conclusion similar to Filippi's. Check out the story, "In the Nose of a B-17," to learn what it was, and watch some really cool videos of this vintage warbird circling .