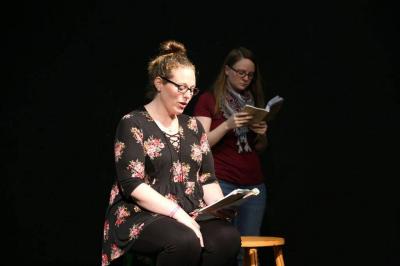 Laramie, Wyoming, 1998: Matthew Shepard, a gay student at university is brutally tortured, and left to die. Six days later, he does. Not what one would think of as an inspiring start to a piece of mesmerizing theater. A storm of political change involving hate crime laws and definitions of hate crime were to follow over the next several years.

One month later, writer/director Moises Kaufman and members of Tectonic Theater Project in NYC traveled to Laramie, and for a full year interviewed members of the community. With the town still reeling from the tragic event and the notoriety they received from it, the reactions were wide. Hundreds of interviews were conducted and the group's own experiences while there culminated in The Laramie Project.

With an ensemble cast portraying dozens of roles, The Laramie Project debuted in 2000 to great controversy and acclaim. Often picketed and condemned, it has stood the test of time and remained relevant in our society. A tragic event that was, at the time, current news is now a part of our cultural history, and the play serves to remind of us this.

Dramashop, not one to shy away from thought-provoking or potentially controversial productions, is staging their own rendition, and the timing is interesting. Now 20 years after Matthew Shepard's murder, how has public opinion changed? How has it stayed the same?

The production features Kathleen Cahill, Michael Haas, Megan Hamm, Kayla McGhee, Chase Miles, Jesse Olszewski, Alyssa Pelinsky, and Adam Rossi all in multiple roles, under Zach Flock's direction. With such a great theater company, Erie is more than capable of bringing justice to this well thought out piece of writing and research. An opportunity to see this production is one to take advantage of. — Marnie Foss