Riding the bus is easier than you think 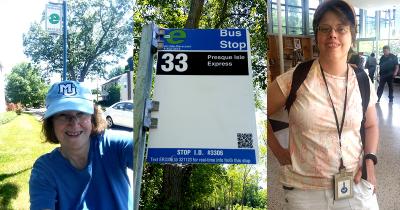 Liz Allen
(left) Columnist Liz Allen waits at West Sixth and Lincoln Avenue for a bus en route to the West Erie Plaza, where one can transfer to the Presque Isle Express. (middle) A bus stop designates a stop at Waterworks for Route 33, the new Presque Isle Express service. (right) Julie Minich, associate executive director of All Aboard Erie, finds u201cpoetryu201d when buses are rolling, so itu2019s appropriate that one of the people she ran into at the EMTA bus shelter at East Seventh and French streets was Erie poet Bigg Wash. He rides the bus to work because his car needs expensive repairs, he said.

On the heels of my May Erie Reader column about how to improve walkability in Erie, I pitched my next idea to the editor: I wanted to write about riding the bus.

Of course, I felt sheepish admitting that there might be a learning curve.

Don't you just stand on a corner, hop on the bus, pay the fare and plop into a seat? I don't even have to worry about exact change; I have my senior citizen card, entitling me to free or reduced-fare service not just in Erie but around Pennsylvania. I felt like a hotshot when I used my card to ride the subway from suburban Philadelphia to Center City for free last summer.

In Erie, though, I've regarded my occasional bus rides between my westside neighborhood and downtown Erie more as larks than as necessity. Sure, I conserve gas, I don't have to search for a parking spot and I've done a small bit to save the environment.

But transferring from one bus to another seems like a hassle, and who wants to fritter away time waiting for the next bus? Besides, if the weather is lousy or I'm running late, I can always drive or ask my husband to give me a ride.

I know I could do better about riding the bus more often, and now is the perfect time, because the Erie Metropolitan Transit Authority is sponsoring its Public Transit Challenge, encouraging residents, government employees and business owners to ride the bus at least once a week in June.

My determination to ride the bus more frequently actually began a few months ago, when my Erie City Council colleagues and I talked about holding a City Council meeting or two in the community this summer, about taking Erie County Council on the road. If we moved the council meetings outside of City Hall, maybe we could all take the bus, I suggested at a caucus. Wouldn't that be a good way to focus on neighborhoods, as outlined in the "Erie Refocused" plan?

Maybe some council members balked at my bus idea because taking the bus can seem daunting.

Thanks to some helpful tips, though, I've learned that riding the bus can be easy, fun and worthwhile. You just need to study the schedules and plot your trip. And things promise to get even easier under the leadership of Lynn Schantz, who became EMTA's executive director on May 3. Schantz says that one of his first projects will be to publish a ridership guide — in print and online — about how to use the bus system.

"The big thing is to have an educated ridership," says Schantz, a native of Murrysville, near Pittsburgh, who makes his home in Andover, Ohio.

The new guide will be available "all over the city," including at hotels so that visitors know they can "take the bus all over town," he says.

Schantz, 62, who worked in information technology before making a mid-career switch to transit, says his goal is to make EMTA "the best transit authority in the state." His job, he says, is to "help increase awareness, to let residents of the county and the city understand how user-friendly the system is and that we want to make constant improvements."

A few years ago, EMTA decided not to stock route maps on buses, reasoning that everyone has a cell phone to check schedules. It's true that there are good apps for riding the bus in Erie, but I'm old school about traveling. I use Google maps on my phone, but I also like consulting the maps stashed in our car.

EMTA has a rack of route maps at its office, 127 E. 14th, and I picked up bunch, along with a system map, when I interviewed Schantz.

Schedules are also posted at bus shelters, but they can be hard to read, especially if the shelter is crowded. I met several passengers recently who seemed resigned to waiting until a bus going their way showed up.

Besides, not everyone actually does have a smart phone.

Julie Minich, 46, has a flip phone, so to plan her bus trips, she prints out the information from her desktop computer. Julie is associate executive director of All Aboard Erie, which advocates for passenger rail, high-speed rail and bus service; Julie heads the bus committee. In October 2016, Erie County Executive Kathy Dahlkemper appointed her to the EMTA Board.

A native of Clarion County, Julie received her undergraduate degree from Mercyhurst and her master's degree in social work from Washington University in St. Louis. In fact, as we chatted, we learned that we had lived about five minutes apart from each other in University City, Mo., although she lived there about 10 years after I had moved to Erie.

But Julie didn't ride the bus until she returned to Erie and started to accumulate "more parking tickets than Penelec bills." In 2000, frustrated with searching for parking spaces and then having the meter expire, she became a "choice" rider on EMTA.

Now she works to dispel stereotypes about EMTA riders. "I have a car. I have (auto) insurance. I have a house," she says. Yet she chooses to travel by bus, unless she is doing a big grocery-shopping trip or when there's a hard rain. By driving fewer miles, she saves money on gas and insurance. She's reduced her carbon footprint. She doesn't worry about parking tickets.

But riding the bus isn't just pragmatic; it's her passion. "My heart goes pitter-patter when I see buses," she says.

At the June 6 Erie City Council meeting, Julie spoke about EMTA's Public Transit Challenge. What perfect timing! I asked Julie if she would help me learn Erie's bus system and she readily agreed.

First, though, I started on my own, by taking Route 33, the Presque Isle Express, on June 11, the first day the free weekday service to the Tom Ridge Environmental Center and to Presque Isle State Park began.

The Presque Isle service started with one bus as a pilot project in 2017. This season, EMTA is operating two buses. The first leaves from the West Erie Plaza for Waterworks, where you can transfer to another bus to go further out on the peninsula.

The Presque Isle Express runs Monday through Friday, starting at noon at the West Erie Plaza and continuing every 30 minutes until 6:30 p.m.

On the 12:30 p.m. bus, I met Tammy Reynolds, 45, who buys a monthly bus pass for $49 because she likes to take "any bus, any time as long as they are running." She rode the complete peninsula loop that day, taking in the lovely scenery and enjoying her favorite part of riding the bus — "people-watching."

I rode to Waterworks, where I got off to eat my brown-bag lunch, read a book and swat at the cottonwood fuzzies. Next time, I'll transfer to the second bus. Maybe I'll ride to the Perry Monument, the Lagoons, one of the beaches or the Presque Isle Lighthouse. I could stop at Sara's or TREC on the return trip.

I hope that EMTA expands the service to weekends and extends the hours on Tuesday evenings when the Sunset Concert series takes place at Beach 1.

Currently, service is free from the West Erie Plaza, but you have to pay your fare if you ride a bus to the shopping center. Residents of Erie's east side could use a free connection to the peninsula, so I also encourage EMTA to think about adding a free Presque Isle Express run that starts on the east side.

But that's for the future. For now, I've learned that, as Tammy and Julie told me, people-watching is one of the many pleasures of riding the bus. Another advantage is the chance to explore new parts of Erie County.

Julie, for example, has taken the bus to Corry, North East and Albion. As an EMTA Board member, she wants to be familiar with the entire Erie County system. "I saw areas I had never seen before," she says.

Even in familiar parts of town, you might spot things you wouldn't notice from your car, as I discovered when Julie and I began our bus adventure after we attended the Erie Art Museum's Midday Art Break on June 13.

Julie took the Route 4 Liberty Street bus from Southwest Erie, purchasing an all-day pass for $3.10 when she boarded.

I parked my car at Blasco Library, caught the Route 22 trolley bus from the Intermodal Center and exited at W. 5th and State streets.

After eating our lunches and enjoying the Erie Philharmonic's string performance, Julie and I left, intending to take the Route 16 bus to North East. But instead of riding to quaint grape country, we opted for the Route 3 Peach Street bus from East Seventh and French streets.

This proved to be a good choice. The bus quickly filled up — a young man going to work at Country Fair on upper Peach Street; shoppers and employees headed to the Millcreek Mall; a mom with a couple of kids who got off at the state Department of Motor Vehicles. Passengers carried shopping bags and maneuvered shopping carts. They chatted with each other or buried themselves in their phones.

Motorists get frustrated with the congestion on Peach Street, and those with an appreciation for aesthetics might be put off by the glut of chain stores. But safely ensconced in the bus, I looked out the window and spied a bustling scene of big-box stores and independent businesses all along Peach Street.

Julie, meanwhile, praised the professional bus drivers who know their customers by destination if not by name.

"I see the beauty in it, I see the community, I see the poetry, I listen to the conversations," she says to describe the ambience of an Erie bus ride.

And in a world where road rage erupts too often, politeness prevails on the bus. As each rider exited the bus, they paused to say a sincere "thank you" to the driver.

Please take the bus challenge any month, not just in June. You'll say thank you, too.

Liz Allen is open to suggestions on which bus routes she should try next. You can reach her at lizerie@aol.com.