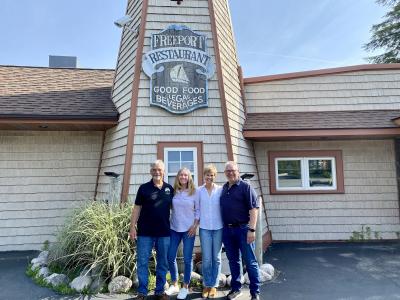 Red Letter Hospitality, a multi-restaurant business in North East, PA, manages many restaurants in the Erie area. These include, The Skunk and Goat Tavern in North East, Molly Brannigan's in downtown Erie, The Cork 1794 in Millcreek,  as well as three CoreLife Eateries in Ohio.

Now, Red Letter Hospitality has had the opportunity to add another local restaurant onto the list. As the previous owners of the Freeport Restaurant, Jerry and Judy Holdsworth, planned to retire, they decided to sell the restaurant to Red Letter rather than close it entirely. Billy Lewis, the owner of Red Letter Hospitality, is close with Jerry and Judy, stating: "This is an outstanding restaurant and we are thrilled to keep the Holdsworth family legacy not only intact, but propel it into the future."

Lewis continued, sayin that "this is so special for me. I've been a loyal customer since I was a kid, my children grew up on Freeport breakfasts and sausage dinners and my parents have had a standing Saturday morning breakfast date with friends there for decades. Our entire family is excited about this opportunity." While no plan has been set in place for the reopening, many look forward to seeing a local favorite be given a chance at a new life.