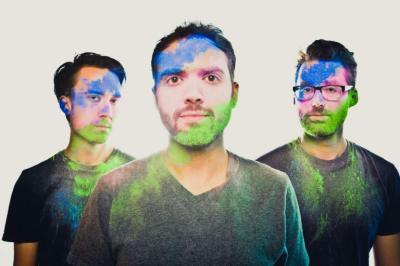 As it turns out, the band had been diligently gathering material for their 2021 LP Bonfires, hotly anticipated and warmly received by their avid grassroots fanbase. Consisting of longtime friends Evan Friedell, Aaron Gorsch, and Packy Lunn, the group oscillates between synthy pop rock and poppy synth rock throughout the album's 10 tracks, chock full of catchy hooks and anthemic choruses. If you spent your 2010s musically enamored with the likes of Passion Pit, Hot Chip, Atlas Genius, and Capital Cities, you will find much to love with Jimkata.

That is if they weren't in your regular rotation already. The band released six albums between 2007 and 2016, with robust touring schedules that would often include pit stops in Northwestern Pennsylvania or Western New York — not far from their home base in Ithaca, N.Y. within the Finger Lakes region. Their date at Basement Transmissions is their first headlining show in Erie since a 2017 performance at the King's Rook Club (they did however, perform in September's Fire Lights Music and Arts Festival in Edinboro).

Shake off your post-Turkey Day daze and come prepared to party.