Re-live your childhood with Raiders!

For extreme fandom enthusiasts, DIY tinkerers, offbeat cinephiles, and hardcore Spielberg lovers, Raiders! is sure to warm the heart. 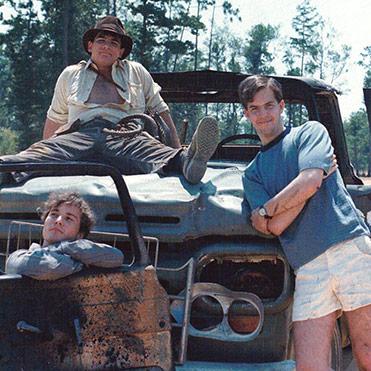 In 1982, two pre-teen boys in Mississippi decided to produce their own shot-for-shot remake of Steven Spielberg's beloved 1981 film Raiders of the Lost Ark. Over the next seven years, armed with allowance money and all of the technology available to 11-year-olds in the eighties, they methodically recreated every scene of the Harrison Ford favorite. Except one.

After years of no-budget attempts at Hollywood action sequences, one crucial moment proved too difficult to stage. Worse still, the duo's friendship was pushed to the limits as they bickered over a girl. By the late eighties, the film remained tragically, endearingly incomplete.

Fast-forward to the early aughts, when file-sharing and social media began to allow homegrown projects like theirs to circulate freely. The remake soon found its way to horror-maestro Eli Roth (of the Hostel franchise), who sent a copy to Harry Knowles (founder of the nerd-friendly website Ain't It Cool News). A cult classic was born.

For extreme fandom enthusiasts, DIY tinkerers, offbeat cinephiles, and hardcore Spielberg lovers, Raiders! is sure to warm the heart.

But it still wasn't finished. Accordingly, Coon and Skousen's documentary isn't limited to the eighties. It also follows the filmmaking duo, Chris Strompolos and Eric Zala, as they turn to Kickstarter to complete the project in 2014. Now in their forties, the childhood friends make one final attempt to complete the labor of love they devoted so much of their childhoods to.

If that doesn't sound exciting to you, I probably can't convince you with flowery language. For extreme fandom enthusiasts, DIY tinkerers, offbeat cinephiles, and hardcore Spielberg lovers, Raiders! is sure to warm the heart. Everyone else can stay home (and be boring). – Dan Schank