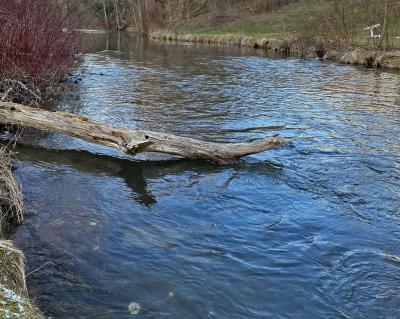 Kimberly Firestine
Mallory Run, which Edinboro Lake runs in to

Explaining microplastics and their results during a virtual panel, Faran Savitz, Conservation Associate at PennEnvironment, said: "Plastic doesn't biodegrade well. An apple core or a piece of paper will break down into organic components over time, plastics don't do that. Instead, they just break into smaller and smaller pieces of plastic. Pieces less than five millimeters -- or about the size of a sesame seed -- are called microplastics …" Savitz said microplastics have been found in places like Mount Everest, food, rainwater, and air. "It's really concerning because microplastics not only contain chemicals that are harmful to our health, and to the health of wildlife, but they can concentrate toxins that are already in the environment, acting as a vector for harmful chemicals."

Pennsylvania Rep. Tim Briggs (D, 149th District) assisted in sample collection and discussed the methodology of the research, stating: "We look for four types of microplastic: fibers, film, fragments and microbeads. Some of these can come from litter or from waste in landfills and incinerators, others are shaped by clothing made from synthetic fibers when they're worn or washed." Briggs said microplastics can originally be produced as the five-millimeter size or smaller for products like beads, cosmetics, or other plastic products.

With the new Presidential administration came new legislative efforts and rollbacks if previous policies, as noted by Pennsylvania Rep. Mary Gay Scanlin (D, 5th District). Scanlin said, "So many of them were so weighted towards business and not at all towards the environment so we've got a lot of work to do to rebalance that." Discussing the Zero Waste PA package currently being worked on by PA legislators, Scalin said " (it)  really important and it's a way that we can move forward on the state level (while) simultaneously moving forward on the federal level."

In August 2020, the International Recycling Group announced the opening of "the world's largest plastic recycling facility." According to a previous Erie Reader Report, IRG looked to add 50 jobs to the area, eventually hoping to expand to 150 opportunities and to be fully operational by the end of 2022. Stephanie Wein, Clean Water and Conservation Advocate at PennEnvironment, commented on the addition of the plant near Lake Erie, noting "A lot of this plastic actually wouldn't be going towards recycling as we traditionally think of it, but it would actually go into plastic to fuel processes to be used to fuel things like Coke plants." Wein then said the process has been described to PennEnvironment like that of a "giant cheese grater."

"You can imagine the fly-off microplastic pollution that could come from sitting that so close to the lake. That's something that we're concerned about and looking into with the proposed IRG sorting facility." Savitz added that previous research has shown Lake Erie has "some of the highest concentrations of microplastics of any body of water in the world. Anything that could potentially add new microplastics, be it the increased truck traffic, which leads to microplastics being shipped by tires, or the plastics at the facility themselves is not ideal for the lip."