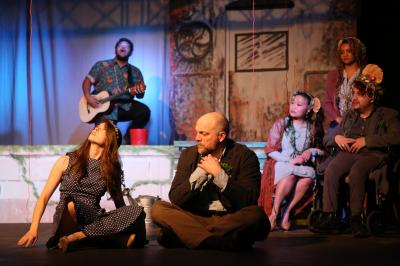 On Friday, April 22, Dramashop will be debuting Eurydice, their third adaptation of a Sarah Ruhl play following stage productions of In the Next Room (The Vibrator Play) and The Clean House in 2013 and 2018, respectively. In Eurydice, the Pulitzer Prize-nominated Ruhl retells the Greek myth of Orpheus from the perspective of its female lead. Following her untimely death on the day she is to be wed, Eurydice starts on a critical journey through the underworld where she reunites with her father —- a new twist on this classic tale. It is then that she must make the ultimate decision whether to stay with her father or return to her lover in the land of the living.

Written nearly 20 years ago, Ruhl's modern interpretation of this ancient story incorporates new character perspectives, fresh story elements, and visual effects intended to bring out the best in each production's set designer. Directed by Anna McJunkin, Dramashop's adaptation will feature Maeve Kirby in the titular role alongside Matthew Fuchs as her Father and Playhouse regular Aaron Holman as Orpheus in his Dramashop debut.