Revival, a Southern Gospel Cabaret Not Here to Preach

Britton – along with an accompanist – will present a special performance of the work at Gannon's Schuster Theatre for one night only. 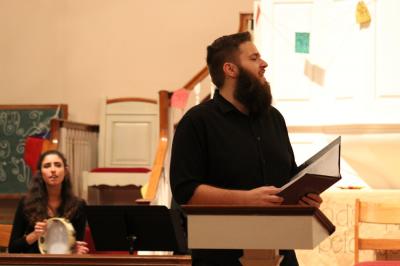 NOTE: Due to a reported health emergency, this event has been canceled, with tentative plans for a rescheduled performance.

The Southern Gothic style "employs macabre, ironic events to examine the values of the American South," according to Wikipedia.

He ended up answering his own question with the new musical, Revival, a Southern Gothic Gospel Cabaret, which explores the crossroads of sexual identity, religion and theater. While erecting a storytelling platform that exhibits his Texan upbringing, the music that permeated his church experience intermingles with his encounter with the all-too-grotesque practice of gay conversion therapy.

Britton – along with an accompanist – will present a special performance of the work at Gannon's Schuster Theatre for one night only.

A Houston native with a BA in Theater from Stephen F. Austin State University, Britton has created a musical event that is as painfully honest as it is infused with the joy of acceptance and love of oneself. Revival premiered in New York City in April 2018, with a performance in Boston that same weekend.

The adult themes in Revival, including sexuality and religious conflict, make this evening performance best for mature audiences. — Cara Suppa