This festival is first in Erie's B-B-Queue. 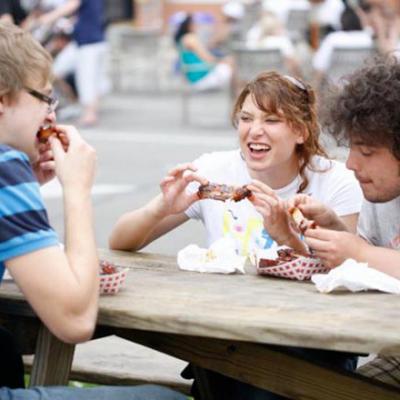 Perry Square will again transform into Thoracic Park for the 26th Annual Ribfest, or Erie's worst place to announce your veganism since 1991. Eight contestants will vie for the honor of best rib, best sauce (decided by a panel of guest judges), and the people's choice award (as voted by you, the festival-goers) in this carnivore tour-de-force. Cleveland's Pig Foot ran wee-wee-wee all the way home with the top prizes last year, while Jack-on-the-Bone (ribs) and Armadillo's (sauce) settled for seconds after not quite breaking the caramelized crust.

Perry Square will again transform into Thoracic Park for the 26th Annual Ribfest, or Erie's worst place to announce your veganism since 1991.

In the meantime, Carolina Rib King, Pigtails BBQ Co., Mojo's Rib Shack, Big Boned BBQ, and Famous Dave's have been brushing up their skills (and grills) in hopes of knocking off the top hogs. Although preparation styles vary from region to region, the adage "low and slow" is the connective tissue that binds pitmasters across the nation. To break down one such approach: Dave Amstutz of Jack-on-the-Bone (Massillon, Ohio) coats his slabs in his proprietary blend of 12 herbs and spices, smokes them 3½-4 hours over local sassafras wood, then slathers them in his signature sauce before grilling.

Sauce (or lack thereof) is the principal determinant for one's barbecue affiliation – Carolinians favor vinegar- or mustard-based "mopping" sauces, Missourians prefer thicker, sweeter tomato-based sauces for a generally messier experience, while in Texas, sauce is broadly considered a sacrilege and/or banned altogether. Wear a BBQ-stain around San Antonio and you might as well be wearing the Scarlet Letter. Do so in Memphis (proponents of thinner, tangier tomato-based sauces) and they'll likely shake their heads and go on playing the blues:

Speaking of the blues (and rhythm-and-blues and rock n' roll which has its roots in the blues), the Ribfest has a full rack of live music lined up for all four days, including Stiletto (headlining Thursday's Ladies Night), First to Eleven (formerly M4), and the Riffriders. For the complete schedule, check erieribfest.com/bands. Pro Wrestling Rampage performers will be pounding their chests in the ring Saturday (1 p.m., 4 p.m., and 7 p.m.) as you pad yours with all that smoky goodness.

Do your kids find civilized behavior a boar? Send them to the Rib Kidz Fun Zone to ride some rides (Ride-A-Ribba-Rama passes available Wednesday-Friday for $10, Saturday for $15) while you swine-and-dine. The winners of the 2016 Ribfest will be revealed Saturday at 7:55 p.m. as participants are evaluated on the sauce, appearance, taste, and texture of their finished products. As a cherished rite of summer, Erie has stuck to its ribs for over a quarter century and doesn't appear at risk of falling off the bone anytime soon. – Matt Swanseger