Ribs For Your Pleasure: Ribfest 2019

That's when Erie's Wild Rib Cook Off and Music Festival, or Ribfest for short, sets up — and sets off — an explosion of smoky, sweet, and savory scents. 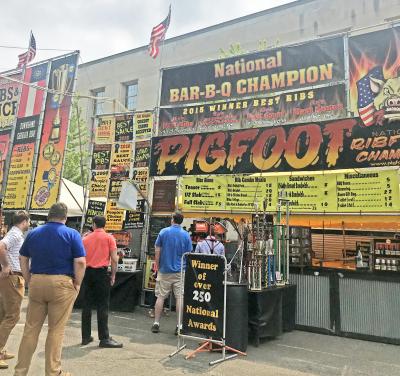 There is no shortage of good smells when hanging around downtown and Perry Square Park, but the end of May tends to be downright mouth-watering. That's when Erie's Wild Rib Cook Off and Music Festival, or Ribfest for short, sets up — and sets off — an explosion of smoky, sweet, and savory scents.

Local businesswoman and entrepreneur Kathi Danielson, the owner of Performance and Event Management, LLC, said, "I know that most people believe that the Ribfest is run by the city. It is not." In fact, she purchased the rights to produce Ribfest in 2004, and has been at the helm of seeing the event to fruition every year since. Her talent for event production is obvious, as the four-day Ribfest is loaded with much more than just smoked meats, and it seems to grow each year.

Families can count on the RIB Kidz Fun Zone, with rides that are available via the Ride-a-ribba-ramma pass, or individual tickets, all four nights. "Beer on the Plaza" is presented thanks to Alkeme, the official beer sponsor for 2019. A variety of vendors will sell on-site, while, "we are also featuring women-owned, women-focused businesses on 'Ladies Night,'" Danielson added. This networking and sales event takes center stage on Thursday from 5 p.m. to 9 p.m. in the Big Top Tent.

The event would not be complete without tons of live music — Me and the Boy, Katie and Jesse, 100 Proof, and Jasmine Morgan, among others — and, of course, rib judging. The general public is invited to cast their vote for the People's Choice award, while the local group ManBQUE will be on hand with their own independent judging.

It's a jam-packed four days, and it is no surprise that people visit from out of state to get a taste of what Erie's Ribfest is cooking up every year. — Cara Suppa