Rivers and Roads: Discovering the Covered Bridges of Ashtabula County

Cross the Ohio border into the charming, rustic past 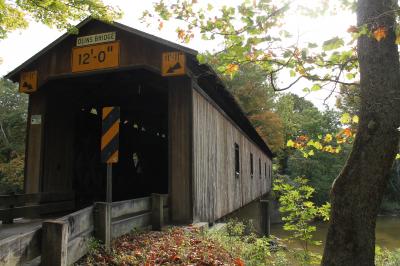 Erin Phillips
The picturesque Olins Bridge built in 1873 is named for the family whose land it is built upon and still lives there to this day.

My dad's first new car was a 1973 MG-B convertible, dark red with a silver racing stripe and black interior. Many of my childhood memories involve this car, and I can still picture it perfectly. The smell of the inside of the garage it sat in over the winter: a mix of leaded gasoline, leather, and old wood. I remember sitting in the front seat (long before I should have been allowed) and looking at the magnets on the glove box advertising the Sports Car Club of America Covered Bridge Rally of 1975 and 1976, and I imagine my young parents adventuring in their cool car, racing through the back country roads and across the covered bridges of Erie and Ashtabula County. Now, eight months into a pandemic, the number of activities I feel comfortable participating in dwindles. I feel like I am at the perfect moment in my life to take a break from my omnipresent work-at-home husband, wild toddler, and remote-learning 3rd grader, to take a drive and experience those bridges that my parents enjoyed some 45 years ago, and that the people of Ashtabula County have been enjoying for generations.

Erie County has only two remaining covered bridges (Neimeyer Road in Waterford built in 1875 and the Sherman Covered Bridge in Albion built in 1870) and both are currently under construction and restoration. However, our neighboring county to the west has managed to hold onto most of their covered bridges, and has used their popularity as an economic boon. Many, if not most, of the covered bridges in Ashtabula were either constructed or restored in the 1980s under the vision and supervision of former county engineer John Smolen. At the time, the rural county of Ashtabula was in a major economic downturn, and in examining what resources the county had to offer, Smolen made the decision and the county (and in some cases, the federal government) made the financial investment to shore up its bridges to draw tourists to the area. The plan paid off, as Ashtabula is now known as the covered bridge capital of Ohio. It touts 19 bridges in total, including the longest covered bridge in the United States (named for the one who conceived it: the Smolen-Gulf Bridge), which was built in 2006.

You may be asking yourself, as I did when I began this project: Why cover a bridge? Back when many of these bridges were built, in the mid to late 1800s, the most readily available resource was timber. And, while wood was plentiful, "wood, by its very nature, must go the way of flesh rather than bone" states author Carl Feather in his comprehensive book The Covered Bridges of Ashtabula County. When wood is exposed to moisture, freezing, heat, etc. it will decay, no matter how strongly the bridge is built. The purpose of the roof in a timber frame bridge, therefore, is mainly for protection, and to increase the bridge's longevity. Some in the past speculated on other purposes, including keeping livestock calm while crossing a raging river or as a respite of shelter while traveling during the horse and buggy days. Obviously, nowadays, there are much more durable materials to use, but the charm of the covered bridge lives on.

And so, on a crisp Sunday morning in autumn, I leave my family behind and set out for the longest amount of time I have been away from them since the start of the pandemic (insert mind-blown emoji here). I've got a Yeti full of coffee and Guided by Voices playing in between the GPS instructions in a much less interesting car than my parents, but it feels good to hit the road, see some beautiful fall scenery, and learn about a county so close by it seems crazy I hadn't realized all it held before now.

Very early on into Ashtabula County, I come upon three horse-drawn carriages working their way down the road and I feel as though I've just driven back in time, which is a feeling that continues as I work my way deeper into the county. The first bridge I find is one of the newer bridges that sparked the beginning of the covered bridge revival in Ashtabula: The State Road Covered Bridge. It is huge and beautiful, situated over Conneaut Creek. There is a parking area with public access to the creek and forest below, which allows a great opportunity to take in sweeping views of the bridge. You could spend all day right here, it's so picturesque and expansive, but I stay for just a few minutes: the rest of the bridges are calling.

The next bridge I find is the Root Road Bridge in Kingsville. Upon reflection after my drive, this bridge is my favorite. This is what you picture when you think of an old covered bridge. It has it all. Weathered whitewash, gaps between the creaking floor beams, random piles of horse manure surrounded by autumn leaves, goldenrod and aster, with no sounds but the birds and the Ashtabula River beneath you. The Root Road bridge was built in 1868 and underwent extensive restoration in 1982. This bridge has the kind of oldness that can give you chills, in its simple beauty and in the thought of all the history that has gone on through and around it.

I make my way around the county and find a few more beautiful old bridges. One, the old Graham Road Bridge, is no longer functional, but during the bridge preservation effort in the 1980s, it was set down on the land of the grandson of one of the original builders of the bridge. John Benson's grandfather helped build the bridge in 1913 and it was moved to land on their property after the county decided that the bridge needed to be replaced for safety. It is now a park attraction and venue, with benches and tables for picnics, and a beautiful, historic backdrop for weddings and other events.

I head back up towards the lake and hit a few more bridges before I head east back to Pennsylvania. The Benetka Road Bridge was built on the site of an old grist mill that was constructed in 1829. There were likely other bridges built over the mill-stream but most believe the current bridge to have been constructed around 1900. According to Carl Feather's book, there are timbers in the bridge that have two different kinds of saw marks: circular saw marks and well as vertical marks, likely made by sash saws powered by the mill. This indicates that those timbers were hewn around 1860 or earlier, suggesting that the bridge was built then, and rebuilt more towards the turn of the century. The county also restored this bridge in the 1980s. Be aware that the curving, south approach to the bridge has a blind spot. Locals know to beep their vehicle's horn upon approach.

The Olin Bridge on Dewey Road is a picturesque old one, built in 1873 and spanning a particularly scenic section of the Ashtabula River. The Olin Bridge is named for the family who has owned the property for more than 150 years. Connections to this land for the Olin family go back to at least 1850, when Almon Olin was born in a log cabin on the river. And given the overwhelming beauty of the landscape, it is not surprising that his descendants stayed.

As I make my way back to I-90, I make one final stop at the Creek Road Bridge. As I approach, I notice some other travelers with a covered bridge map in hand. As I get out of my car to walk around, I greet the two middle-aged women and teenage boy. "You're all alone?" one woman says. "Yes, but I have two little kids at home," I reply. "Say no more! You need to get out!" they laugh. They tell me they live on the Ohio border close to Indiana and they were looking for something fun to do that didn't involve being around many people. And they decided to get to know some unique parts of their own state. They ask me how to pronounce "Conneaut" and are amazed at the answer.

This final bridge spans Conneaut Creek and has multiple trailheads and places to park and picnic. It strikes me that we all have an opportunity right now, as we try to find ways to get out and have fun that are safe and socially distant. You can do like I did, and as this family has: get to know a little bit more about where you live and who lived there before you. Ashtabula is just a few miles to our west, but driving these dirt roads alongside horses and passing over covered bridges that have been there for 150 years, it is like driving straight into the past. Go alone. Go with family. Just go and discover and enjoy the fall and the beauty that lives in our part of the world that has previously gone unnoticed. And, if you can, be sure to take a cool classic convertible.

A complete list and map of all the covered bridges in Ashtabula can be found at the website: www.coveredbridgefestival.org