11th Roar on The Shore Gets the Party Poppin'. 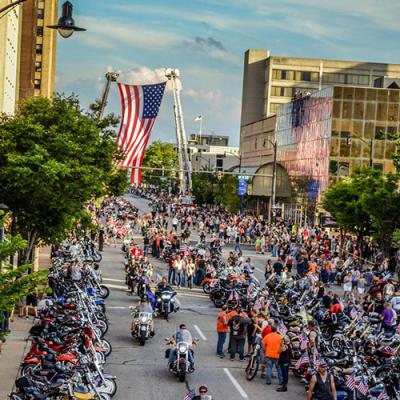 Whether you'd rather take a bike or a hike, the 11th Annual Roar on the Shore is at long last in our sights. Some of us lean into the motorcycle mania full-throttle; others sit back and wait for it to pass by. As usual, there is plenty to do (or plenty to have nothing to do with) – and as is our (North Coast) custom, we're all over it. Hop in the sidecar; we'll get through this together, one day at a time.

Wednesday, July 12 — We know you're revved up for this, but it may behoove you to slow down for a moment. According to the Insurance Information Institute, motorcyclists in 2015 were 29 times more likely to suffer a fatal accident (per vehicle mile traveled) than automobile drivers. The Fallen Riders Memorial Run pays tribute to deceased bikers and their bereaved families, with all proceeds funneled into the Erie County chapter of the Fallen Riders Memorial Fund (departs from Penn State Erie, the Behrend College at 6 p.m.).

Capping off the night for a second consecutive year is Jackyl, who throws hard rock, heavy metal, and Southern rock into a wood-chipper and spits it all out in a raucously rambunctious display.

After respects are paid, the Manufacturer and Business Association and Roar Board Chairman and Erie Mayor Joe Sinnott welcome the riders still with us to the Hub at Perry Square. Capping off the night for a second consecutive year is Jackyl, who throws hard rock, heavy metal, and Southern rock into a wood-chipper and spits it all out in a raucously rambunctious display.

Thursday, July 13 — Whatever Machete doesn't Kills you makes you stronger; 2017 Roar on the Shore Grand Marshall Danny Trejo is living proof. Before becoming a prolific bad boy onscreen (335 credits and counting), Trejo spent much of his off-screen youth on the wrong side of the law and battling addiction, lending an authentic edge to his various personas.

To balance things out, Thursday's first ride is dedicated to the good guys. The Randy Polley Faith and Freedom Ride (11 a.m.) honors law enforcement, with registrants traveling from Perry Square to Street Track N' Trail in Conneaut Lake. Afterwards, all those gathered at Presque Isle Downs will follow Trejo into the heart of Erie for the Bringin' in the Roar Parade (6 p.m.). Then, like Trejo, you can flirt with disaster as Southern rockers Molly Hatchet take the main stage at Perry Square.

Friday, July 14 — One day. Three rides. Once bitten, twice shy. Before blues-rockers Great White perform at 9 p.m., bikers should not be timid about exploring their options:

2) The Roar to the Microbrews Dice Run (departs from the Brewerie at noon, visits six local microbreweries)

3) Thunder on the Isle: The Mayor's Ride (departs from the Manufacturer's Business Association at 5:30 p.m., circles Presque Isle)

Saturday, July 15 – Praise the Fairy Godmother — your Saturday can be transformed up to FOUR ways and is guaranteed to end with Cinderella (or at least the band's heart and soul in Tom Keifer):

1) A oenophile's dream (the Roar to the Vineyard's Poker Run, departs from Off-Road Express East at 11 a.m. for six local wineries).

2) A legend, including both beer AND deer (A Beer for a Deer Legend Ride, departs from Plyler Overhead Door in McKean at 1 p.m. for a Pine Junction luncheon).

Sunday, July 16 — All things must pass, whether it's emission testing or the test of time. Howl for a while at an afternoon SeaWolves game (Roar to the Parks, departs from Rainbow Gardens at 10 a.m.) before roaring off into the sunset. Some will have won. Others will have lost. But Erie will have for sure mounted another rally.