Blues legend Robert Cray took the Stage at Mercyhurst University on Feb. 24 for an evening of tarnished treasures.

by Cory Vaillancourt
View ProfileFacebookTwitterGoogle+RSS Feed
March 7, 2012 at 8:30 AM 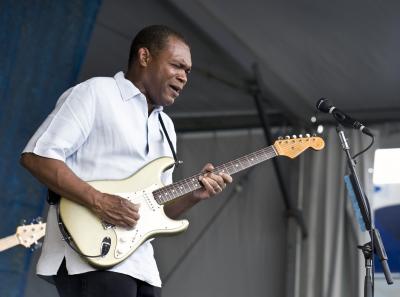 It's hard to believe Robert Cray has been at it for almost 40 years. After all these years of winning Grammies and selling multi-platinum albums, there's no doubt Cray is a seasoned pro. Long known as a unique and talented guitarist, Cray also has a voice that consistently reminds the listener of what Marvin Gaye might sound like today if he would have kicked his father's ass properly instead of leaving the old man with enough strength to pull the trigger of the .38 that ended his life in 1984.

The Robert Cray Band walked onto the stage at the Mary D'Angelo Performing Arts Center on the campus of Mercyhurst University at 8:13 p.m. Friday, Feb. 24, and immediately laid out one of Cray's tarnished treasures, a haunting vocal arrangement of "I Shiver" wherein he wasn't shy at all about showing us the Gaye. With Tony Braunagle holding the drum chair down, locksmith Jim Pugh on keys, and Richard Cousins banging out the bottom on bass, Cray deftly fingered a metallic hard tail Stratocaster. Over the next hour and sixteen minutes—thirteen songs—he would swap the twangy tone of that silvery Strat for the warmer sound of a sunburst Strat eight different times, offering up slightly differing views of the Robert Cray World.

As promised, the band bounced around through Cray's catalog, going all the way back to "Bad Influence" while not neglecting more recent work, like "Two Steps from the End." Between songs he bantered back and forth with the audience, and even joked with the Mercyhurst University President Tom Gamble and his wife, who sat in one of the elevated private boxes; he called them "royals" due to their lofty, exclusive perch, and gave an appropriately stiff Queen Elizabeth-style wave.

Cray's teasing between songs gave the show a relaxed feel, but was not limited strictly to vocal parries with the audience. Interestingly, he teased a few notes of some well-known songs not originating in Robert Cray World – The Beatles' "Eleanor Rigby," Stevie Wonder's "I'll be Loving You Always," and "Burning of the Midnight Lamp," by Jimi Hendrix. These brief, out-of-context diversions elicited great joy upon recognition by the crowd before they quickly faded away. That's why they're called teases.

By 9:29 p.m., Cray was closing out the set with his most energetic solo of the night during "Smoking Gun." After a two-minute break, the band came back out and did a two-song encore, ultimately culminating with "Time Makes Two," a dour, austere, Hendrix-y tune that perfectly encapsulates the clean, sharp, and hollow pain of the Robert Cray World he's been visiting for the last 40 years; if Robert Cray can continue giving us glimpses of his World, let's hope he's got another 40 years in ours.