Guitar legend Robin Trower will be pouring it on April 29 at the Warner Theatre. 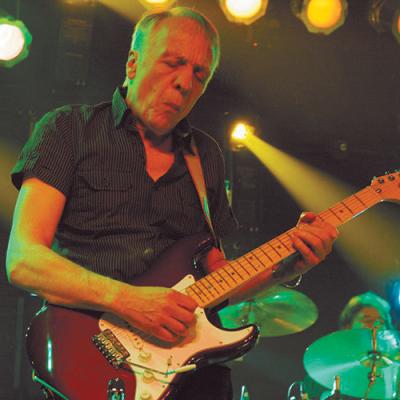 Thirsty for the bluesy, funky, effects-laden rock n' roll of yesteryear? Need some wah-wah? Well, you're in luck – because guitar legend Robin Trower will be pouring it on April 29 at the Warner Theatre. If you weren't around for the '70s or were (are?) otherwise too rolling stoned to remember, Trower was widely regarded as the standard-bearer for electric guitar in the wake of Jimi Hendrix's passing.

Trower was widely regarded as the standard-bearer for electric guitar in the wake of Jimi Hendrix's passing.

Trower played on five albums with Procol Harum in the late '60s before striking off on his own in 1971, forming a power trio with bassist/vocalist Jimmy Dewar and drummer Reg Isidore. While Trower's command of the Fender Stratocaster compared highly to Hendrix, his band shared a closer kinship with the likes of Cream, The James Gang, and Jeff Beck Group stylistically. Psychedelia was downplayed somewhat in favor of gritty soul, thanks in large part to Dewar's husky vocals. Trower's first two albums with this lineup, 1973's Twice Removed From Yesterday and 1974's Bridge of Sighs, are considered benchmarks of the classic rock genre, although cuts such as "Day of the Eagle" and "Bridge of Sighs" don't receive the airplay their contemporaries do (which is probably a blessing in disguise, because many songs of that era have been played to death so many times they could fill a mausoleum).

The 2016 edition of the trio features Richard Watts filling in and filling out the sound admirably for the departed Dewar. Chris Taggart takes the controls behind the drum kit. Despite over 50 years of use, Trower's phalanges still function with high fidelity. Ease off the pedal if you dare – this show promises to be flanger-lickin' good. – Matt Swanseger