"Being a musician is a life-long learning experience, if you're doing it right, and they are." 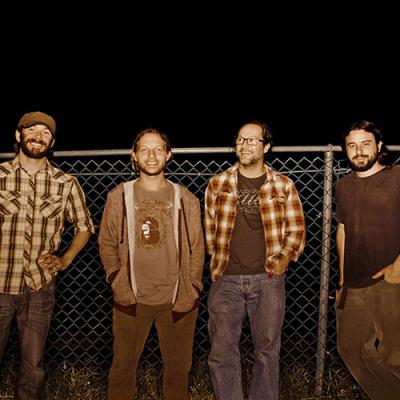 After a long drive from the frigid north to the still-chilly south, we've touched down at some way-out-there festival grounds just outside of Athens, Ohio. It's something like 3 a.m. I dunno, maybe 4. What with all these fiery jams the Rumpke Mountain Boys are throwing down at the Hoopla in the Hills festival's opening night (day?), my brother and I have both just straight-up lost track of time, and so has everyone else.

I'm right behind the stage, snapping photos of those Boys doing their thing — a trippy, boozy, beautiful swirl of expertly-crafted bluegrass — and of everybody else getting down, when, out of the blackness behind me, I feel an arm wrap around me in a tight, friendly little hug.

At the end of that arm was a hand, and in that hand was a big ol' jug of whiskey ... coming right at my face.

"Thanks for everything you do, man. We appreciate it," he says to me.

I'm not a drinking man, but I took one, long sweet swig from that jug anyway. And it was good.

Fun. Friendly. And freakin' amazing live. Those are a few of the simpler ways I'd describe this well-loved Cincinnati-based string quartet, who I've had the pleasure of catching at a few different festivals in recent years.

One of their most well-known fans and sometimes-collaborator, Grateful Dead Hour host David Gans, has said it like this about them: "One of the things I love about the Rumpke Mountain Boys is that there's a fundamental honesty in their presentation. This is something they share with my other heroes, Donna the Buffalo and the Grateful Dead. They don't make set lists ahead of time, they don't rehearse their songs to a fare-thee-well — they perform in real time. All four of them write, which is very important, and they draw songs from a tremendous variety of sources. ... Being a musician is a life-long learning experience, if you're doing it right, and they are."

And they'll be doing it right, no doubt, when they visit the Gem City to headline at the King's Rook Club.

They'll be joined for the evening by PA Line and Broke Boland for before-and-after performances both upstairs and down at the complex, making for what's sure to be one helluva night of string-based music in Erie.