by Alex Bieler
View ProfileFacebookTwitterInstagramGoogle+RSS Feed
November 12, 2014 at 6:35 AM 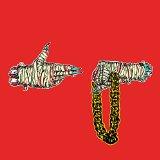 To say that hip-hop fanatics were excited about the release of Run The Jewels 2 would be an understatement. I mean, this is a fanbase that raised over $40,000 to have RTJ2 remixed with cat noises (true story). That being said, super rappers El-P and Killer Mike easily met expectations on their blazing second album. Nobody is safe from the dynamic duo's fiery tongues, from tyrannical cops to Donald Sterling, with the latter being roasted at the end of the blistering "Lie, Cheat, Steal." RTJ2 packs a powerful 11-track punch, with Mike and El blasting out of the gate with the impassioned "Jeopardy," never slowing down on bangers like the thumping "Blockbuster Night Part 1" and the powerful – sonically and lyrically – "Early."  From the scorching verses to the inspired production, RTJ2 is a massive success from a duo that seems to be having more fun than anyone else in the business.