With Three Mile Isle and Beast on the Bay returning, running on Presque Isle has never been better. 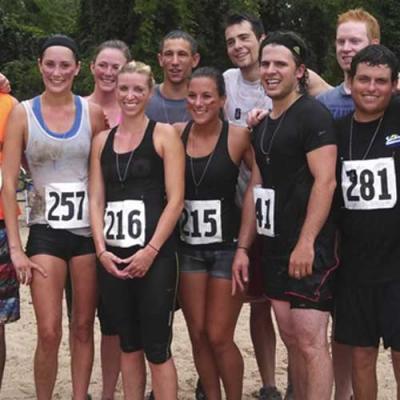 We are natural-born runners, and we have been that way since we first started getting around on two legs. Thousands of years ago, endurance running gave our tribal ancestors a much-needed advantage. Although they weren't the fastest runners on the African plains, they were able to track large game over long distances, running the whole time, until the terrified prey finally dropped over from exhaustion.

Even today, there are certain indigenous tribes, like the Tarahumara of northwestern Mexico and the Kalahari bushmen of southern Africa, that are centered around running, where children are taught to run as soon as they can walk, and continue to run throughout their lives and into old age.

Humans are the top long-distance runners in the animal kingdom. The only other animal that comes close is the horse. But we can even beat horses over great distances.

For many of us, however, the skills and natural advantages of our hard-running ancestors have mostly faded away — running is no longer necessary for survival.

For some of us, though, running is the perfect way to reconnect with the primal forces of the body.

Instead of hunting antelope, we run for other rewards. We run because we like competing with our fellow runners for trophies and a sense of accomplishment. We run because it is excellent exercise. We run for the rush of endorphins known as a "runner's high." And sometimes we run just because it feels good.

No matter what your reason, it's hard to beat our local gem, Presque Isle State Park, as a running venue. For road runners, there is a 13 mile paved road that winds it's way around the entire peninsula — twice around the park and you just completed a marathon. For those who like to run on the sand, there are miles of peacefully deserted beaches where you can soak in the serenity of Lake Erie.

And if you like your running to include navigating obstacles, getting wet and muddy, and cooperating with your fellow man, Presque Isle has something for you, too. On June 14, Three Mile Isle will return to the beaches of Presque Isle State Park. In its second year, Three Mile Isle is an obstacle course set over — you guessed it — three miles, extending from Beach 10 to Beach 11. According to Jon DeMarco of Presque Isle Partnership, Three Mile Isle is "a non-competitive, un-timed event aimed at placing participants outside their comfort zones."

With 14 obstacles set over a mixed terrain, the course is appropriate for all skill levels. There are mountains of sand to climb, raised beams over water to make your way across, tunnels to traverse, walls to conquer, and even a giant slide for the kid in everyone.

"Everyone will finish — camaraderie is key," DeMarco adds.

DeMarco expects about 400 participants this year and you can register as a group or as an individual. The registration fee is $75, and includes a moisture-wicking T-shirt, a commemorative dog-tag, and a post-race party and meal in the parking lot of Joe Root's Grill. Proceeds from the event will go towards improvements to the park.

If three miles doesn't seem like a big enough of a challenge to you, you can look at Three Mile Isle as a warm-up for Beast on the Bay, a 10-mile, extreme obstacle course that takes place Sept. 9 on the shores of Presque Isle and benefits the Barber National Institute.

With summer starting to heat up, you owe it to yourself to find a reason to make it to Presque Isle and get running. After all, it's what we were born to do.